mAadhaar Lets You Carry Aadhaar In Your Pocket

Aadhaar card holders will now be able to carry their information on their smartphone, courtesy the mAadhaarapp launched by Unique Identification Authority of India(UIDAI). To use the mAadhaar or ‘mobile Aadhaar’ app, users need to have their phone number registered with UIDAI. Once the process is complete, they can download their details on the app, which will show data such has name, date of birth, gender, address and the photograph on the device. With this mAadhaar, users will not need to carry around the hard copy of their Aadhaar with them anymore. This is another step by the government to digitise processes in the country, and make initiatives streamlined using technology. 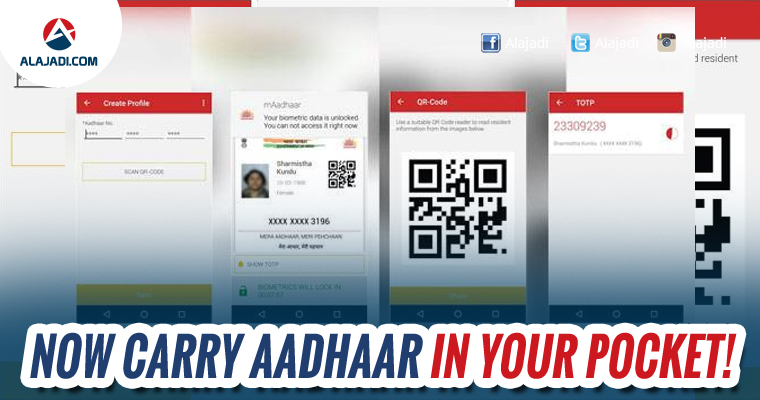 The mAadhaar app, which is already available for download on Google Play, has been launched only for Android users as of now but might be released for iOS soon as well. Notably, the app also allows users to lock or unlock biometrics data. “Once resident enables Biometric Locking system their biometric remains locked till the Aadhaar Holder chose to either Unlock it (which is temporary) or Disable the Locking system.” Interestingly, the mAadhaar app also comes with “Time-based One-Time Password (TOTP)” feature that can be used instead of SMS-based OTP.

With the mAadhaar app, users will be able to get the updated view of the profile upon completion of the update request and they will even be able to share QR code and password protected eKYC data to retrieve accurate demographic information from it instead of manual entry. However, the app is currently in beta stage, notes UIDAI in its announcement tweet, and some of the features will be made available post future updates. To recall, a new amendment to the tax proposals in the Finance Bill for 2017-18 made it mandatory from July 1 for anyone who has a PAN card to provide their Aadhaar number to the principal director general of income tax (systems) or DGIT (systems).