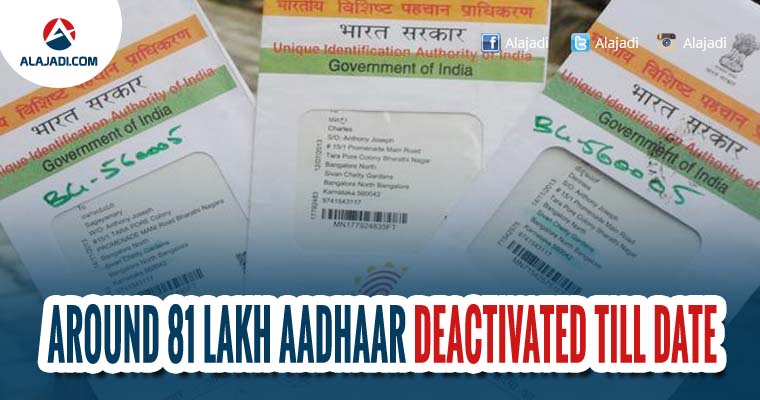 Wondering if your Aadhaar card is still active? Here are simple steps to check the same:

1) Open the main website of UIDAI and click on the ‘Verify Aadhaar Number’ tab which is under the Purple ‘Aadhaar Services’ section.

2) Once you click on the ‘Verify Aadhaar Number’ tab, it will redirect you to another page where you will be asked to put your Aadhaar card number and security code. Click ‘Verify’.

3) If your Aadhaar card number is active, then the last page will show ‘Active’ with your personal details alongside.

However, if your Aadhaar card is inactive, you will have to update your details at the nearest enrollment centre. You will need to submit all the required documents again for this. Once you’ve filled out the Aadhaar update form, your biometrics will also be re-verified. There’s a fee of Rs 25 which will have to be paid. The biometrics will only be updated if the old biometrics details match your new ones. In this case, your old biometric details will be nullified.
The documents required for updating Aadhaar card are basically divided into four categories; government authorised ID proof, birth certificate, residential proof and proof of relationship.

For ID proof you can submit any one of the following:

For birth certificate you can submit any one of the following:

For residential proof you can submit any one of the following:

And finally for Proof of relationship, you can submit any one of the following:
Passport, MNREGA job card, PDS card, pension card, CGHS/ECHS/state government/ESIC medical card, army canteen card, marriage certificate issued by the government, birth certificate issued by the registrar of birth, municipal corporation and other notified local government bodies such as tehsil, taluk, etc, any other state or central government issued family entitlement document.
Earlier last week, government had also deactivated over 11.44 lakh PAN cards in cases where multiple PANs were found allotted to one person and in cases where they were allotted to either non-existent person or in the names of persons with false identities. There have also been cases where PAN card details of some people have unknowingly been used to create or support fake identities. This facility to delete or de-activate the PAN is available with the Assessing Officer through application software.