Coconut breaking by devotees is a common sight in temples in almost all states across India as an offering to God. However, the coconut breaking adversely affects cleanliness in temples and lot of labor is put in to clean the temple at the end of the day. Recently, a Hanuman Temple in Sarangpur, Gujarat came into limelight for a miracle that surprised many devotees who visited this temple. The huge statue of Lord Hanuman erected outside the temple was the centre of attraction. 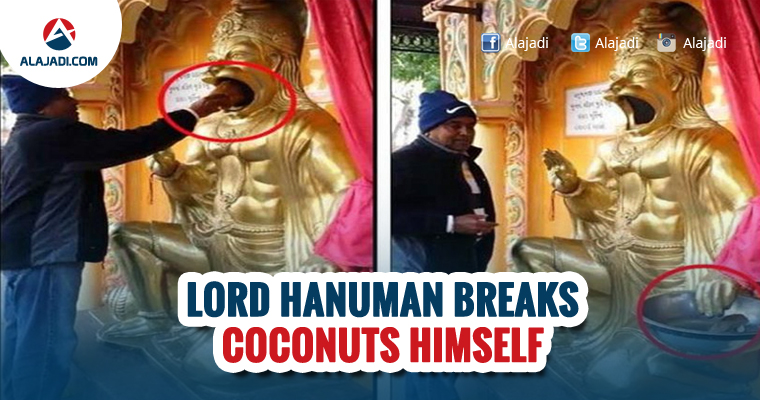 The devotees who visited the temple were asked to offer the entire coconut directly into the mouth of Lord Hanuman’s statue rather than breaking it elsewhere outside. What happened next shocked the devotees as they could not believe what they saw. The moment a coconut was inserted in the mouth of Lord Hanuman’s statue, it was cut into two equal halves and one of the two halves came out through the statue’s hand for devotees to collect. Seeing the happy-surprised devotees, the Temple management revealed the truth behind the whole thing.

he temple management got a coconut breaking machine installed in a Hanuman statue erected outside the temple. If you go and insert the coconut in the mouth of the Hanuman, the machine inside will break it into two. The statue will return one of the two pieces to you through its hand. The news spread like fire and people started pouring in to test it. The purpose of keeping the temple clean was achieved by the authorities and this sets an example for other temples to follow.