Laughing Buddha, as we all know, brings good luck, contentment and abundance in one’s life. It depicts plenitude of whatever one wishes for be it wealth, happiness or satisfaction. Usually depicted as a stout, laughing bald man with an overtly exposed pot-belly stomach, laughing Buddha or celestial Buddha is better known as Hotei or Pu-Tai. It is said that his appearance comes from a Buddhist Zen monk who lived over 1000 years ago. His protruding stomach and jolly smile earned him this name. 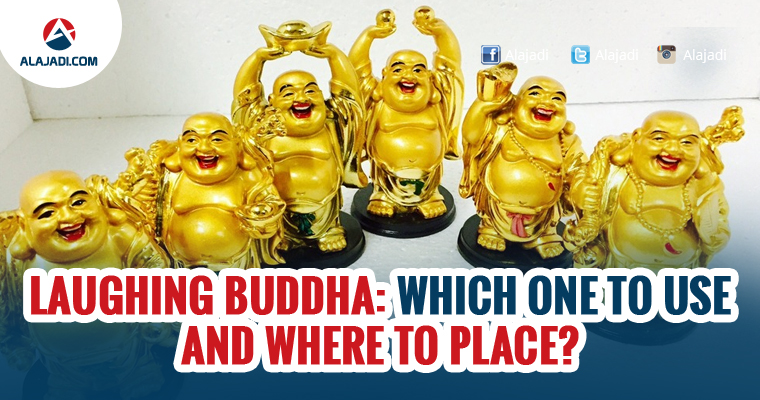 Though, a symbol from Feng Shui, however, laughing Buddha holds a lot of significance in our lives. Most of us strongly believe that keeping it in a particular direction fulfills distinct desires. Hence, it is important to know that which direction should it be kept in and also which type of it should be used by individuals.

2) Laughing Buddha with a bowl
The bowl depicts a monk’s life. It is associated with renunciation of material possessions and attaining enlightenment.

3) Laughing Buddha with a fan
This one symbolizes happiness and joy. It is said that waving of fan by Buddha sculpture depicts banishment of troubles.

Placement and direction of laughing Buddha:

1) One should place a Buddha statue in his or her home to bring contentment and serenity. Buddha’s birthday falls on 8th May and it is considered auspicious if a candle is lightened on his birthday. It is said that it fulfills desires.
2) Placement of Buddha in the East sector (Feng Shui Bagua Formula) or in a direction where it could be seen by all the family members when they are seated in the living room or the main hall is considered to resolve the differences among st the family members.
3) If the Buddha statue is placed facing one’s Sheng Chi direction (Feng Shui Kua Formula) then it is said to bring wealth, helpful in self-development, well-being and victory. It helps in achieving one’s goals.
4) Laughing Buddha displayed in the South east direction of the main hall, dining room or bed room of the home brings windfall luck and increased income in the family.
5) Placing Buddha in office gives clear mind, reduces tensions and eliminates enemies’ effect.
6) Keeping Buddha on one’s desk enhances luck and fulfills aspirations.