Coolie’s Kid Gets Picked Up By Google

When someone, who have lived their life fighting poverty, finally reach at the top and make their parents proud, it is a story not ordinary. Ramchandra may have been a son of daily wage earner but he is now living a life his well-wishers never imagined. Working with Google, this IIT grad looks back at his life with a smile.

Ramchandra Sankhala’s parents while his father, Tejaram Sankhla works as a labourer in Rajasthan’s Sojat town.  50-year-old Tejaram loads henna onto trucks and earns somewhere between Rs. 100 to Rs. 400 a day. Ram’s mother worked as a labourer at construction sites as well but after he got a job, she looks after the 1.5-acre farmland they bought with Ram’s salary. They did not know what their efforts will someday be rewarded and their son will earn a handsome package of Rs 36 lakh yearly. They just wanted them to leave a better life than they did. 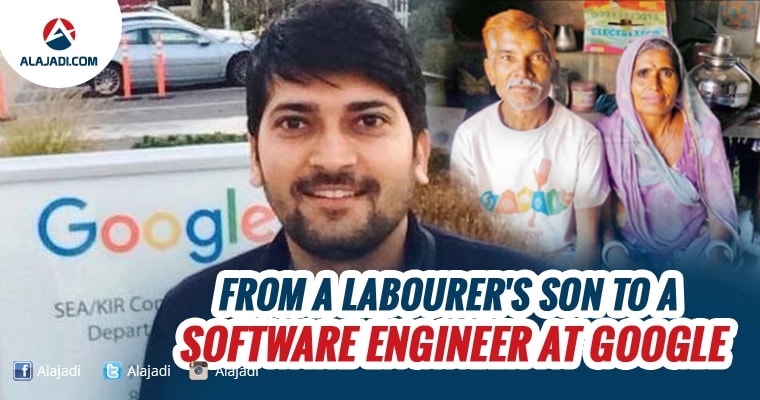 The family lived in a kaccha house and sent him to a Hindi medium school. He scored well in his Class 12 but unlike many households in the lower income strata, Ramchandra’s parents did not let him discontinue his education. His father took a loan for his further studies.

Since I was interested in seeking admission in IIT so I arrived in Kota and took coaching for IIT-JEE, says the Google employee says. Armed with expnothing that can’t be achieved if you believe hard enough. erience he got from the coaching center, Ramchandra later cracked the IIT-JEE and his All India Rank was 1,680.

Later, he got admitted to the IIT-Roorkee and graduated with a B Tech degree in 2013. Ramchandra, who has a younger brother and sister, is an inspiration for students from modest backgrounds and he is doing his bit to spread education in the area. Last year, he sought a one-month leave from Google only to teach kids of an orphanage at a village near Sojat. He has also employed a tutor to teach his illiterate parents who continue to live in Sojat.

Ramchandra has plans of shifting to the United States of America this year and wishes to continue to work for Google or join Facebook. We wish him good luck and hope he continues to inspire and contribute to the educational scene in his native place.