Kamal Haasan and Gautami relationship comes to an end!

Kamal Haasan and his partner Gautami Tadimalla have split. The couple have been in a live-in relationship since 2005. The yesteryear heroine who made a comeback of sorts in Kamal Haasan starrer ‘Papanasam’ has revealed that they are no longer together. The year that was an absolute shocker as far as Kollywood is concerned another bombshell has arrived in the form of Gautami announcing today that she has separated from Kamal Haasan after thirteen years of living together. Here is Gautami’s dignified write-up about this important decision in her life.

The versatile actor’s first two marriage with Vani Ganapathy (from 1978–1988) and Sarika Thakur (from 1988–2004) weren’t successful as he never believed in the institution of marriage. He has two children’s Shruti Haasan and Akshara Haasan with Sarika but due some misunderstanding the couple was divorced. Gautami had a failed first marriage with Sandeep Bhatia and the couple has a daughter Subbalakshmi who is currently staying with Gautami and Kamal Haasan. 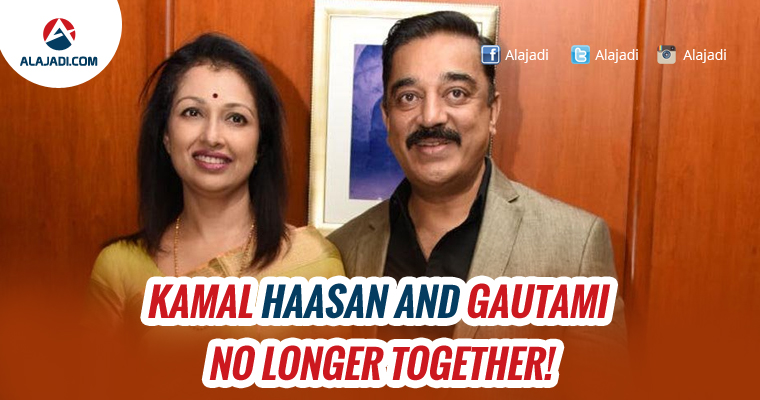 Gautami has published a detailed statement on her Twitter page:

It is heartbreaking for me to have to say today that I and Mr. Haasan are no longer together. After almost 13 years together, it has been one of the most devastating decisions that I have ever had to make in my life. It is never easy for anyone in a committed relationship to realize that their paths have irreversibly diverged and that the only choices in front of them are to either compromise with their dreams for life or to accept the truth of their solitude and move ahead. It has taken me a very long time, a couple of years at the very least, to accept this heartbreaking truth and come to this decision.

It is not my intention to seek sympathy or assign blame. I have understood through my life that change is inevitable and human nature will define that change for each individual. Not all of these changes might be what we expect or anticipate but that does not, in any way, negate the very real impact of these diverging priorities in a relationship. This decision to set forth on my own at this stage in my life is perhaps one of the most difficult decisions any woman will ever have to make but it is a necessary one for me. For I am a mother first and foremost and I have a responsibility to my child to be the best mother that I can be. And to do that, it is essential that I am at peace within myself.

It is no secret that I have always been a fan of Mr. Haasan’s since before I came to the film industry and I continue to admire and cheer on his monumental talent and achievements. I have stood by him through all his challenges and they have been precious moments for me. I have also learned a great deal from working with him as costume designer on his films and I’m proud that I was able to do justice to his creative vision in those films. Along with all of his accomplishments to date, I know that there is much more to come from him for his audience and I look forward to applauding those successes.

I would like to say that I am sharing this monumental happening in my life because I have always lived my life in your midst, with dignity and grace to the best of my ability at all times, and all of you have been a part of my life’s journey in so many ways. I have received so much of love and support from you through the past 29 years and I would like to thank you for the many ways in which you kept me going through the darkest and most painful times in my life.

With love and regards.
Goutami

Adding that she’s neither ‘seeking sympathy or assigning blame on anyone’ post her separation from Kamal Haasan, Gautami stated that she has the utmost respect for Kamal Haasan and thanked him for all the beautiful memories that the couple have shared over the years. Meanwhile, Kamal Haasan is yet to react to Gautami’s confession about their separation.

When dug deeper into the issue, there seems to be the two main reasons for their separation.
While the first season is the spat between Gautami and Kamal’s elder daughter Shruti Hassan during a costume design issue for Sabash Naidu, the yesteryear beauty was quite upset with the same. Shruti and Gautami usually get along quite well in the media as well as off the screen but this rift was a big blow to their bonding.
The second reason is the political interests of Gautami differing with Kamal’s ideologies. Gautami has been planning to enter politics by joining BJP (she recently met Prime Minister narendra Modi) but Kamal was always against getting into the political mess up. When Gautami was determined to get into this path, she parted her ways cordially with Kamal.