Shamanthakamani Movie Theatrical Trailer Is Out

Biggest multistarrer of the decade..? yes it is. Nara Rohith, Aadhi, Sandeep Kishan, Sudheer Babu together doing a movie it is titled as Shamanthakamani. Recently the teaser had got a tremendous response all over, movie lovers are very exited to watch on big screen. The official trailer is released on June 30th at 7 pm. Shamanthakamani is an upcoming Telugu movie scheduled to be released on 14 July, 2017. The movie is directed by Sriram Adittya. Other popular actors who have been roped in for Shamanthakamani are Suman, Rajendra Prasad and Chandini Chowdary. 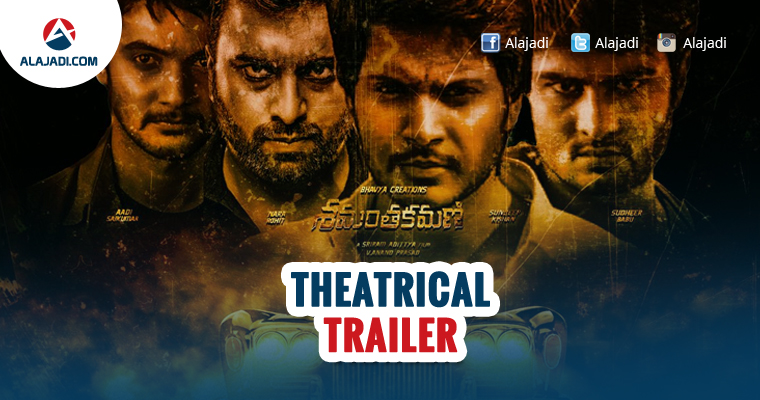 The trailer starts with the super hit song ‘Kisi Ke Muskurahaton’ from the very classic Anari of Raj Kapoor. The audiences are familiar to the characters with the Teaser. Veteran actor Rajendra Prasad is seen creating a lots of laugh. Nara Rohit is seen as Police Officer. All of the heroes are back of Shamanthakamani. The reason for this can be known in the Theaters. This crime comedy gives glimpses of how the director, Sriram Aditya could have mastered the art of this genre with just one film ‘Bhale Manchi Roju’. It’s a promising film for all the heroes, especially for Nara Rohit who is struggling for a decent hit in spite of choosing different subjects. Somehow, he isn’t pressing the right buttons. Even with the multicast, the crime comedy doesn’t look confusing. This trailer gives the hope that the director is going to repeat the magic of his debut movie with ‘Shamanthakamani’ even. Have a look at the interesting Shamanthakamani Trailer below.. Watch this trailer and express your opinions on it.