Jiiva  who scored a good hit with his movie Rangam in Tollywood later hadn’t got any hit here. So once again to bag hit in Tollywood, he is coming with his dubbed movie Rangam 2 which hit the screen on today. This is the dubbed version of the Tamil film Yaan. Featuring Jiiva and Thulasi Nair in the lead roles, Rangam 2 is directed by Ravi K. Chandran and produced by A.N. Balaji under Jasraaj Productions banner. 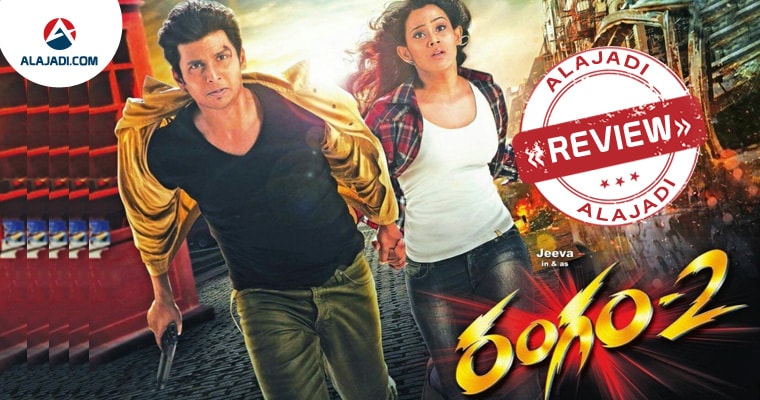 Chandru (Jiiva) is an MBA graduate, who was raised by his grand mother and lives a carefree life with his friends in Mumbai without any job. Srila (Thulasi), on the other hand, is a young driving instructor living with her father, a retired army officer. They accidentally meet each other in the situation of the shootout between cops and terrorists, where Chandru saves Srila and falls in love with her. But same as all movies, Sheila’s father rejects Chandru as he has no job. Struck by his condition, Chandru tries hard and gets a job in a Middle East nation where he is caught in a conspiracy and his struggle to wriggle out of it forms the rest of the movie.

On the whole, the movie  is  certainly worth the watch,  if you do not expect too many fights or too much mushy love in it. The initial fight scenes grab the viewers attention. Interesting narration blend with the predictable story may make the movie average flick in Tollywood.

Jiiva: He acted great in this movie and good in action scenes also.

Thulasi: She plays the role of an obedient woman, who is very focused in life.

Apart from the main leads, the supporting actors, Nassar, Jayaprakash, Karunakaran, Thambi Ramaiah, Bose Venkat and Nawab Shah have also have done a great job in portraying their characters.

The cinematography portrayed the climax scenes perfectly well. The movie wasn’t filled up with too many characters, which adds to the simplicity of the storytelling. Along with the impressive camera, his music syncs beautifully. The screenplay is just average and leaves us a lot to be desired. Romantic and lighthearted moments seem to last too long in a movie that which makes the audience to feel bored sometimes.