Finally, it is time that only the story speaks and nothing else. Guru is an out and out story oriented with it’s touch of reality. Victory Venkatesh has brought in that fresh air of sports stories that only speak about the sport. It is true that Telugu Film Industry has never experienced this kind of a movie and this will be a inspiring watch to people who haven’t watched the Hindi version. Guru is the remake of Hindi movie Saala Kadoos which got great response from critics as well as audience directed by Sudha Kongara. 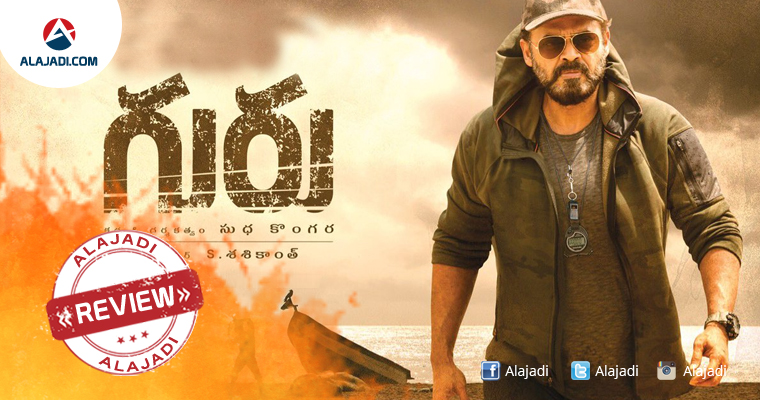 This is the story of boycotted by the India’s Boxing Association, former boxing champion Adi (Venkatesh) turns into an aggressive boxing coach. He has a painful past where his own men cheat him from accomplishing his goal of winning the gold medal. After that, he turns coach and trains the boxers.  But, He is a rude, and arrogant person who unable bare small mistakes and unnecessary politics in boxing academy. With this attitude, he transfers to Visakhapatnam as the coach for Visakhapatnam boxing academy.  He’s on a mission to get an international medal the medal he missed to the Nation. Adi meets Rameswari aka Ramudu (Ritika Singh,) a coolie in Vizag, who lives in a slum. He finds a spark in Ramudu and convinces her to take up boxing. Does Rameswari turn Aadi’s dream into a reality? What are the hurdles that come her way in emerging as an international champion in Women’s Boxing?

It’s been a longtime a sports drama has hit the screens in Telugu. Its a grey area which filmmakers don’t easily tend to try their hand at  least in Telugu cinema. Kudos to director Sudha for choosing this subject and Venkatesh for believing in a script like this and attempting the role defying all the conventions. Gripping narrative, intense emotions, the struggle of a blacklisted boxing champion and upcoming women boxer are shown well. The climax gives audience a goose bump experience.

Venkatesh: He  is a true asset to the movie. His makeover is completely justified.

Rithika Singh:  She has been too good. Her complete transformation from being a vegetable vendor to a boxing champion is inspiring.

Nasser: He goes over the board but is fine in critical scenes.

Music by Santosh Narayanan is splendid. The background score is terrific. The cinematography is excellent. Editing could have been better, especially in the boxing scenes. Dialogues are good. Production values of the film are top notch as the boxing set up and seriousness in the film have been shown in a stunning way. Dialogues are top notch and the way the film moves ahead with songs in the background is very good.