Baahubali, which is known to all as India’s biggest motion picture and as a biggest successful regional film which turned into a national film for its grandeur and making. When Baahubali – The Beginning is released everyone waited for Baahubali – The conclusion’s release to know why Kattappa killed Baahubali. Now, it is the time for us to know the real reason behind the killing of Baahubali. This question has become a mystery and a trending topic all over India and even in International arena. S S Rajamouli who proved his potential in telling a story with Baahubali – The beginning, to the world (as Telugu audience know it much before the release) is so confident with the second part and is ready to entertain us with the conclusion of Baahubali. Let’s see how it works on us as it is releasing today into theatres. 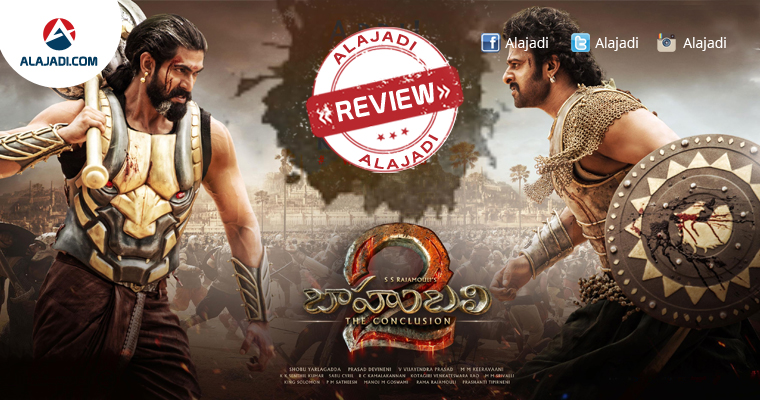 Baahubali (Prabhas) takes oath as King of Mahishmathi kingdom as announced by Sivagaami (Ramya Krishna). He goes to every remote village to know the problems of people and he comes across Devasena (Anushka Shetty) in a place called Kuntala and falls for her. He makes her fall for him and takes her to Mahishmathi kingdom with him to marry her and everything seems to be going fine. Suddenly, Sivagami announces Bhallaladeva as the king of Maahishmathi kingdom. The reasons of her to do so and why Kattappa killed his king Baahubali forms the rest of the story. Just watch it on big screens to know all these questions.

A visual wonder that was seen in the Indian Cinema for the first time with more than 1000 technicians worked together. Audience are so excited and will be happy to see this spectacular movie with 4K resolution. The movie has so much story involved in it. Hats off to S.S. Rajamouli and all the actors and technicians worked for 5 years. First half of the film is excellent with a superb interval block. Second half is good with story and internal political drama taking precedence.Finally, just ignore the simple story line and do yourself a favor by taking your entire family to watch this magnum opus called Baahubali as wonders like these only happen very rarely.

Prabhas: He is superb as Shivudu and Amarendra Baahubali. He is so convincing with his body and his mannerisms in action and war sequences. His macho avatar is the biggest advantage for the characters he played in the movie.

Anushka Shetty: She as Devasena is gorgeous as well as ferocious. She completely owned her character and played it with intensity.

Rana Daggubati: He is a perfect foil to Prabhas. He has shown his talent in the climax sequences.

Ramya Krishna: She as Sivagami has did her best what she has done in part one.

Sathyaraj: He is exceptional as Kattappa, a loyal servant of king.

Nassar: He is in complete command over his role as Bijjaladeva.

Story is simple but Baahubali – The Beginning made the story much surprising and suspenseful. Screenplay is well written which makes audience glued to the screen and dialogues are situational and good. Music composed by MM Keeravani is nice and Saahore Baahubali and Dhandalayya are instant chartbusters and are well shot. His background score takes the movie to another level and makes the emotions stick to the hearts of audience in the second half. His work is one of the biggest advantage that Baahubali posses. Cinematography by Senthil Kumar is superb and his visuals are grandeur to the level of Baahubali. Editing by Kotagiri Venkateswara rao is nice. Art department and vfx studios are to be appreciated for the work they have done to make the vision of Rajamouli come alive in a larger scale. War sequences are well composed by Peter Heins and they are eye feast for audience which are a lot better than Baahubali – The beginning. Production values are apt.