Raja Meeru Keka is one film that is going to release today along with the others. The film initially generated good buzz but with the delay in the release, the audiences slowly lost interest in the movie. Intinta Annamayya hero Revanth is playing the lead role in the film along with Noel Sean. Mirchi Hemanth plays a key role. Popular TV host Lasya is going to be seen in a crucial role in the movie. It is her acting debut in the films. The film is directed by a newcomer Krishna Kishore and Sricharan Pakala composed the music for the film. The film was launched with the blessings of the biggies of Tollywood D. Suresh Babu and Raghavendra rao. It was scheduled and began in May 2016 and now ready to hit the screens today and it has got good response from audience. 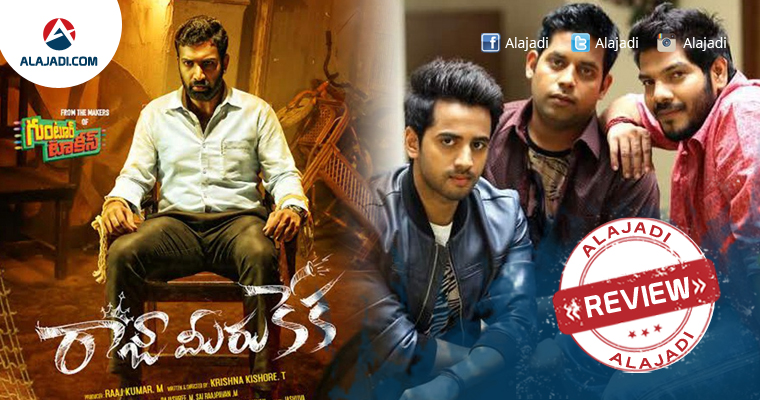 Ravi (Revanth), Sasank (Noel), Swetha (Lasya), Seenu (RJ Hemanth) are best friends. Ravi and Swetha work in a software company named Truetech. Naga Raju (Tarak Ratna) is the CEO of the company which is worth 1000 crores. With the hunger of money, Nagaraju joins hands with the CM (Posani) and invests his entire money in real estate. The board members who are not interested in this resigns from the company which results in the company shares growing down. As a result, the company comes to a close situation. Nagaraju surrender to the cops and CM tries to help him out. On the other side, Swetha and Ravi lose their jobs. Ravi’s father dies of a heart attack and Swetha including her family attempts suicide. What did Ravi, Sasank and Seenu do to Nagaraju who is responsible for many families getting affected is the rest of the story of the film.

Raja Meeru Keka is a film that has a good story. The film was more or less an inspiration from the real incidents that took place when Satyam Software Company has got into a trouble. Coming to the story of the film, it is interesting as well as engaging. Raja Meeru Keka is a film which failed to stick to the theme and has got many deviations. It has a good story but the entire presentation leaves an impression of no interest for the audiences.

Revanth, Noel, Lasya and RJ Hemanth: They are good in the roles and they made us believe that they are friends in real life too. With their natural acting, they brought a true connection with the characters.

Taraka Ratna Nandamuri: He is selection for the CEO role is good and he gave his best for the role.

Posani Krishna Murali: He impressed as a chief minister.

All the actors in the film gave their best in the limited roles and made their presence felt.

The director Krishna Kishore is the writer of the film too. The writing of the film average. The dialogues are good and perfect for the situation but at times, they come with a heavy weight which is not necessary. The screenplay is flat and the narration is weak. Krishna Kishore’s writing could have been much better to make the film an interesting watch. The film has the camera work by Ram Reddy which is good. Technically, the film looks very rich. AV Prasad’s editing is poor. The music scored by Sricharan Pakala is pleasant but the tunes failed to register with us. The background score at times appeared loud but is okay. The artwork by Maresh Ballamki is nice. The makers altogether put a decent effort to make the film rich.