Indian who walked 1,000 kms to buy Ticket to India

A 48-year-old Indian man in Dubai, who has been living in a public park and has no money for even a bus ticket, has walked more than 1,000 kilometres over two years to attend court proceedings to obtain a flight ticket to return home. Jagannathan Selvaraj, who hails from Tiruchirappalli, braved traffic, heat, sandstorms and exhaustion as he made his way through the busy highways of Dubai, travelling a distance of 22 kilometre one way from his Sonapur accommodation to attend the labour court proceedings. 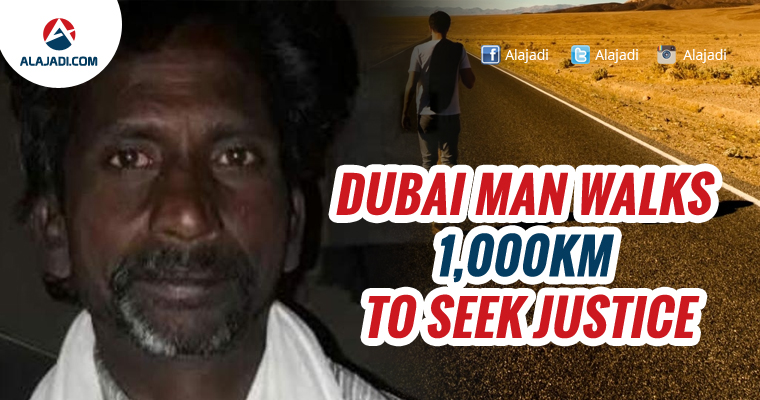 Due to lack of money for travelling in public transport, Selvaraj used to walk for 4 hours on the day of court hearing. The court, however, kept denying permission to him. In the past two years, Mr.Selvaraj attended more than 20 court hearings in the same manner. In the four hours, he covered a distance of 54 kilometres and had to undertake that journey every couple of weeks until a verdict on his case was delivered. My case number was 826 and I had to walk 2 hours in the morning to reach the court in Dubai. I used to get up early morning at 4 am on the days the court was to hear my case. Every 15 days, I had to walk all the way to the court because I did not have the money to pay for bus or taxi, he said.

The sad story of Jagannathan Selvaraj went viral on Social Media now. As a result, Kind-hearted people began appealing External Affairs minister Sushma Swaraj to take necessary measures to help Selvaraj reach his native place. He wants a ticket to go home. All his friends who were living in the park have gone home. He cannot walk all the way to India, and needs just a plane ticket to go home, said a social worker who is trying to help Selvaraj. Selvaraj began his court journeys after his mother died in Tamil Nadu and he was denied permission to go and attend her funeral.