Now, traffic police to act against violations of number plate norms is resulting in an increase in use of stickers reading ‘police’, ‘press’, ‘judge’, ‘human rights’, ‘anti-corruption force’, ‘army’, ‘government’ etc. on vehicles. Many of these motorists avoid paying parking charges and even stop traffic cops from issuing them challans and fines. 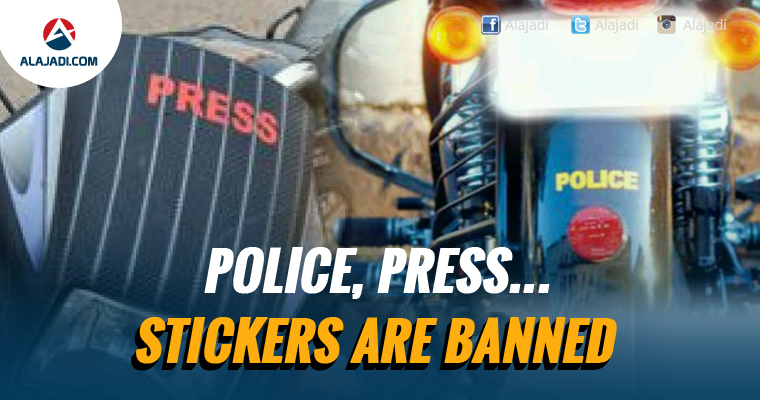 Also, it is not clear if the passengers traveling in these ‘stickered’ cars are indeed the ones they claim to be. It could be family members too. City Criminal Courts advocate S. Pradeep Kumar said while the Motor Vehicles Act remains quiet on the pasting of stickers on windscreens and bumpers, cops can book cases if it is being misused. If anyone who is not a cop, a reporter or a judge misuses these stickers, he or she can be booked for impersonation. The 2001 Indian Parliament attack was carried out by terrorists who had “Press” written on their vehicles. So there is a security threat too.

While it is illegal to write or paste anything on the registered number plate of a vehicle as per Sections 80 (a)/177, Section 50 and 55 of the Motor Vehicle Act, there is no bar on use of stickers on other parts of the vehicle except that the color or design of the vehicle should not be changed. Indian Federation of Road Safety chief functionary Mr Vinod Kumar Kanumala said a total ban must be put in place on use of such nomenclature on any part of the body.

But despite the traffic police boss stating that they can book cases against use of stickers on windscreens if they obstruct the view, there have been hardly any such cases booked.