Victory Venkatesh’s upcoming film ‘Guru’s theatrical trailer was unveiled by the production team yesterday. Venkatesh appeared as a strict and hard boxing coach, who troubles his protege Ritika Singh to the core. He selects a fisher woman to train her up for a cause. This film is an official remake of Bollywood flick ‘Saala Khadoos’ featuring Madhavan and Ritika. In the Telugu version, Venkatesh replaces Maddy as the former Coach who quits boxing due to the politics of the authorities. 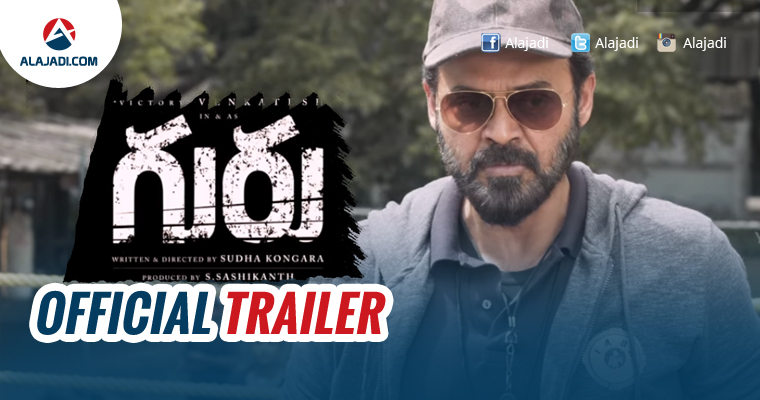 Ritika Singh is doing her part in the remake as well. She will be seen as a wannabe boxer training under a bad ass coach Venky. Both Venky & Ritika has done a terrific job. One could see the kind of effort put in by them while watching the trailer. Director Sudha Kongara has done terrific job. However, it’s Venky’s show. At 56, he shed his extra kilos and looked fitter, meaner as boxing champion.

His hard hitting blows and humiliating words upon her make us developing sympathy on her. “Voora kukkani simhasanam meedha koorchobettinaa, daani drushtanthaa eppudoo penta meedhey vuntundhi,” a dialogue vocalized by Venkatesh with a sheer frustration. Since it’s been a while a sports drama has hit the screens, it has to be seen how people would receive it.  Of course, the story wasn’t revealed by the director in the trailer. Contrary to the troubles faced from her coach, she, herself, proposes him saying ‘I love you’. But then, what factors prompted her saying so? Team ‘Guru’ will reveal answer in the movie only.