The Most Awaited Horror Movie Abhinetri featuring Tamannah in the main lead role is Abhinetri which is also featuring Prabhu Deva ,Sonu Sood in the lead roles. The movie which is touted to be a Horror thriller is being directed by Vijay. The movie is made in Tamil, Hindi and Telugu as well. 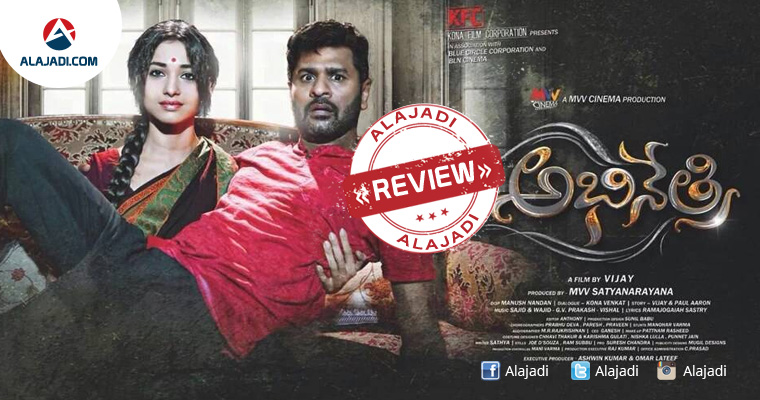 Krishna Kumar as Prabhu Deva who has Only one dream to marry Modern girl. Krishna father calls him by saying grandmother health is serious. Krishna’s family start search a village girl to marry him and finds Devi (Tamannaah). Krishna and Devi get married and shifted to the Mumbai city in Apartment. After a few days, he notices a behavior change and slowly realizes that she is possessed by Sprit. In that Apartment long days ago a model Ruby came to Mumbai became an actress. In that Same House Ruby get died for uncommon reasons. Ruby Starts using his wife to becomes a heroine. Finally, she grabs an actress role in Sonu Sood film. Sonu Sood likes Tamannaah and starts flirting her. How Krishna gets rid of the ghost and rescues his wife is rest of the story.

Movie team recently completed censor formalities and Censor Board members awarded U/A Certificate for Abhinetri Telugu Movie. The film is much more a light-hearted clean comedy. The wonder in the direction springs up in bringing up the twists of the story. Music was good. Tamanna’s performance and Amy Jackson’s cameo are big assets for the film.The star-studded movie is projected to collect it’s production cost.

Prabhu Deva: After a long time, we can see Prabhu deva dances on the big screen.

Sonu Sood: He looks very romantic in this film, And also he played as a Movie star very well.

The movie also features Amy Jackson in a special role. Pruthviraj, Murali Sharma, Sapthagiri are also a part of the movie.

Abhinetri is one of the much awaited trilingual Horror thriller movie. The movie is produced in Telugu by M.V.V Sathyanarayana and the flick is presented by Kona Venkat. SS. Thaman has composed wonderful music for this film. They have made this film with 70 Crores budget and they never compromised how much they are spending for this movie. And this film will definitely give some new experience to every one so watch this film along with your family in theaters only.