The Champions Trophy is over, but not for Yuvraj Singh. By the look of things, the Indian southpaw still hasn’t gotten over India’s recent stint in England. It’s been eight days since India played the final against Pakistan, but Yuvraj didn’t think twice before wearing India’s Champions Trophy jersey during the second ODI against West Indies. Batting first in a rain-affected match, India scored 310 runs in 43 overs. The overs were reduced due to a delayed start. Ajinkya Rahane scored a magnificent hundred while skipper Virat Kohli scored 87. 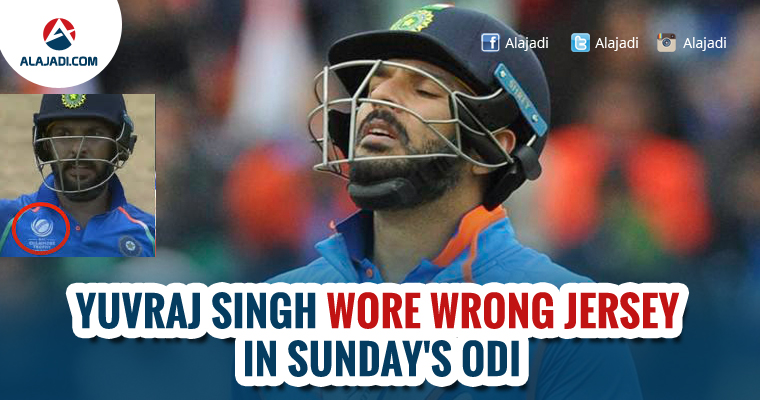 In reply, West Indies managed to post just 206 runs in their 43 overs, falling short by 105. Debutant Kuldeep Yadav took 3 wickets. During this match, veteran left-hand batsman Yuvraj Singh came into limelight due to an unusual incident. The southpaw was seen wearing his Champions Trophy 2017 jersey. Yuvraj’s jersey was flaunting the logo of the ICC tournament.  It is a rule to have the logo on their jersey when a team is playing a particular tournament. But during bilateral series, the team are supposed to wear their normal jerseys. Twitterati was quick to point Yuvraj’s mistake on the social media platform. The 35-year-old had a disappointing outing against the Windies as he managed to score just 14 runs in 10 balls.

Whether the cricketer intentionally wore the jersey in order to change his fortunes with the bat or whether it did not cross his mind is not known yet, but it surely was one of the rarest sights in the game, to see a player wear a jersey, different to that worn by his teammates. Wearing the different jersey, however, had little impact on his performance as he failed to make a significant impact with the bat, scoring a mere 10-bal 14 as India put up 310 runs on the board, which proved to be too much in the end for the hosts, who fell short by 105 runs. Yuvraj walked out to bat at the fall of Hardik Pandya’s wicket on Sunday but just could not get going during his stay in the middle, eventually falling to Jason Holder, caught behind by Shai Hope.