Young Tiger NTR’s most awaited film ‘Jai Lava Kusa’ is gearing up for September 21st, 2017 release. Currently, NTR is busy with the regular shooting of his highly anticipated film which is going on rapid pace. Makers will wrap up shooting soon and commence the post production work.  The film is touted to be a mass entertainer, the actor will be seen in three challenging roles Jai, Lava and Kusa. The film is directed by KS Ravindra who was popularly known as Bobby and produced by Actor Brother, Nandamuri Kalyanram under the banner NTR Arts. Nandamuri fans and audience were quite excited about this film. 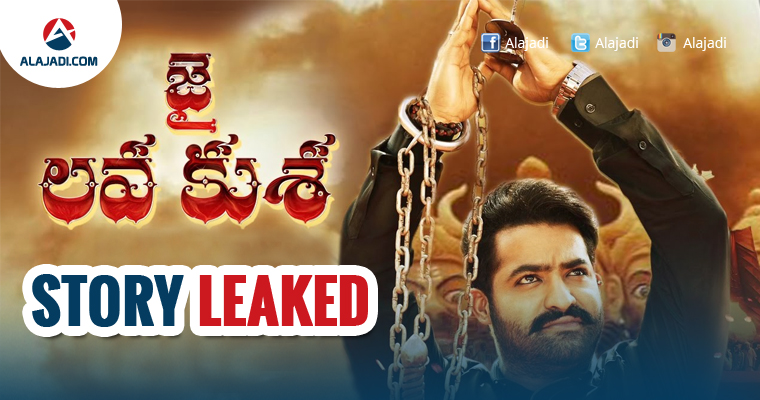 Recently, The film making headlines with constant leaks. A few days back, the makers have faced a huge problem when people leaked teaser before the official launch and recently a song  from Jai Lava Kusa got leaked. The Song appears to be an introductory bit song of “Jai” as the admirer of “Ravana” the Daemon.

Despite taking huge care, the content related to Jai Lava Kusa movie has been leaked over the internet. Now,  the story of the film is rumoured to be leaked on the social media. As per the news, Posani Krishna Murali is the father of Jai but vows to take revenge on Posani thinking he is the reason behind his mother’s death. Filled with vengeance, Jai leaves his father  Posani and becomes a gangster. On the other side, Posani marries again with a lady and lives a happy life with his two sons Lava and Kusa (NTR), who are stage artists. They escape from Jai who vows to kill them. We have to To know whether the leaked story of Jai Lava Kusa is the real or fake, we have to wait till film released i.e, September 21st, 2017.

The film has two actresses Raashi Khanna and  Niveda Thomas in the female lead. Recently the makers released the teaser that features ‘Jai’ character and his  other two roles in the film are heavily guarded.  The film also features  Ronit Roy, Nanditha Raj, Abhimanyu Singh, Hamsa Nandini and Priyadarshi Pullikonda in important roles.