The TTD (Tirumala Tirupati Devasthanams) has made proof of Aadhaar card mandatory for Divya Darshan (Pedestrian) devotees who comes to Tirumala through footpath route. Pilgrims need to produce Aadhaar Card in original while booking tokens for Divya Darshan. This will be implemented from December 2016.

Pilgrims who are visiting Lord Venkateswara without Aadhaar card can produce Passport, PAN card, Driving License, Voter ID card at the time of taking tokens for Divya Darshan. Face scanning and finger printing system has been cancelled for Divya Darshan. 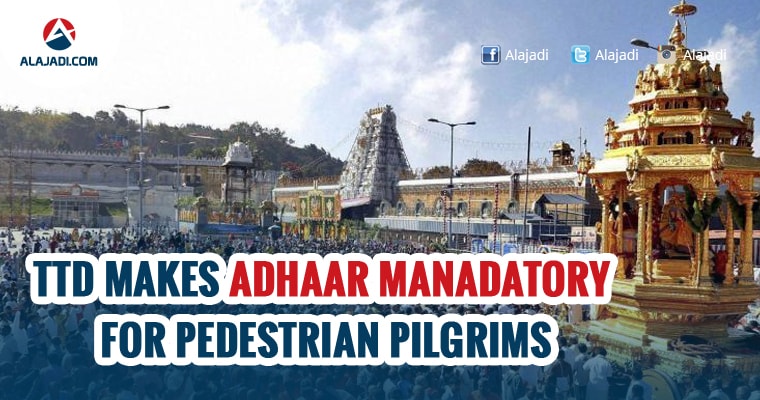 Pilgrims who took footpath route have to take tokens at Galigopuram or Srivari Mettu while reaching Tirumala from Alipiri. Aadhar number will be recorded while issuing tokens.

There will be free bus facility from Railway Station to Alipiri or Srivari Mettu to transport the pilgrims who desire to trek the respective foot path routes as per their choice. TTD also provides free luggage counter for pilgrims to deposit their luggage and get the receipt. After reaching Tirumala they can collect their baggage. After reaching Tirumala, the Divya Darshan pilgrims can avail free accommodation in PACs (Pilgrim Amenities Complex), free tonsuring, free Darshan and free meals at Matrusri Tarigonda Vengamamba Annaprasada Bhavan or at PAC II.

TNIE reported that there was a proposal to withdraw the subsidy and sell the laddu for its production cost of around Rs 34.70 or hike the price to Rs 40 a piece. Among other things, the TTD had also announced that it would redevelop the temple of Goddess Vakula, who is considered to be the mother of Lord Venkateswara. Earlier, the board wrote to the government, seeking the addition of 447 posts of archakas and paricha-rakas in TTD temples and sub-temples.