There comes a time when a star gives in to the demands of a role which he knows will make him not-pretty: as a wannabe wrestler past his prime, Aamir Khan is squat, with a heavy belly, a deliberate gait, and a grizzled beard in Dangal. Only his jutting ears are familiar, the rest of him is pure character. Nitesh Tiwari first attempt at a sports biographical drama. 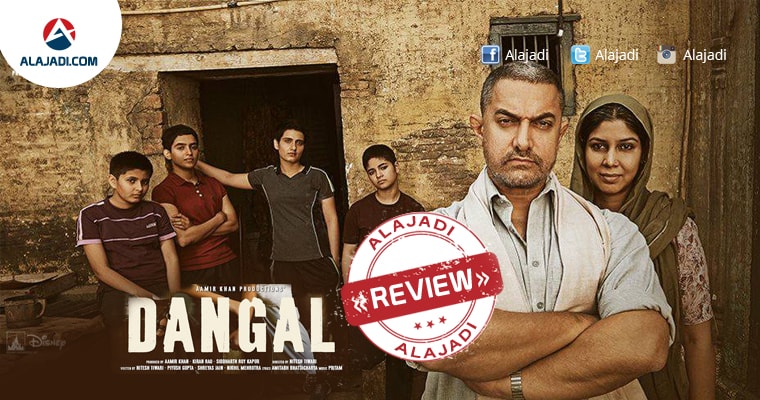 A National level wrestling champ Mahavir Singh Phoghat (Aamir Khan) is forced to give up his sporting dream in order to earn livelihood for his family. He always wishes to have son in order to fulfill his wish of winning a Gold medal for India. While Mahavir is looking for a son, fate has something else planned for him as his wife (Sakshi Tanwar) gives birth to four daughters. With no chance in his hand, Mahavir gives up on his dream.

One day, Mahavir’s elder daughters, Geeta (Zaira Wasim) and Babita (Suhani Bhatnager) have fight with the local goons and packs a punch to the rowdy fellows. After this incident, Mahavir realizes that his daughters are no less than men and starts to train them for wrestling. How the two girls overcome the physical hardship and the social struggle in the rural India. How they made their father’s dream into a reality. Forms the rest of the story.

Aamir Khan’s Dangal has an incredible script and powerhouse performances leave you impressed. Phogat’s wrestling skills were shown right at the beginning to establish that he was a skilled and strong wrestler. The progress in the girls learning is also shown very naturally, without making it look like they have learnt it overnight.

Aamir Khan: His best performance in the recent years.

Sakshi Tanwar: As Mahavir’s wife is a perfect choice for the role. She emotes extremely well.

Zaira Wasim: She as Geeta is absolutely stunning. She pulls off the wrestling bits too with great effort and looks highly convincing.

Suhani Bhatnagar: The young Babita too does an equally commendable job.

Ritwik Sahore: As Mahavir’s young nephew is a delight.