Nenu Local is a Telugu action-romantic film directed by Trinadha Rao Nakkina and produced by Dil Raju under his banner Sri Venkateswara Creations, story, screenplay and dialogues are written by Prasanna Kumar Bejawada. It features Nani and Keerthy Suresh in the lead roles. Music is composed by Devi Sri Prasad. The trailer of the film was launched on 14 January 2017, and got good response for the trailer. 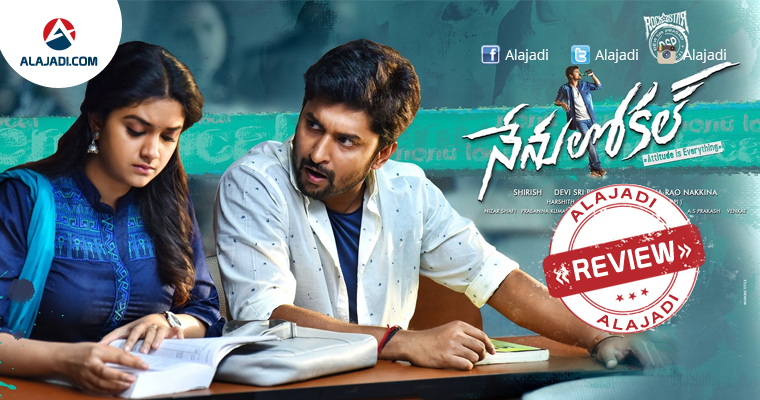 Natural star is going to be seen as a happy-go-lucky engineering student. Nenu Local is an action-romantic film. Babu (Nani) is a guy with an attitude. He joins MBA to woo Keerthi (Keerthy Suresh). The chemistry between Nani and Keerthy Suresh will impress you for sure. The film Nenu Local has a unique story which will definitely entertain all class audience greatly. Interval twist on Keerthi throwing a challenge to Nani to convince her father in twenty-five days before the wedding date set by her father with Naveen Chandra. What happens next forms the crux of the film?

Nani has become a minimum guarantee hero off late. All his films are doing decent business and Nani too, is selecting some very good projects these days. Nani showed his natural charm rendering dialogues in his typical style. Then is the actual subject of Nani and Keerthi’s love with some peppy, energetic DSP background music. Nani addressing Keerthy Suresh as POTTI is one of the hilarious moment. Posani, Eashwari Rao as Nani’s parents and Sachin Khedkar as Keerthy Suresh father were also hilarious.The comedy that is generated through Nani’s one-liners and comedy punches are written well. The climax of the film has been handled well and showcased in an interesting way which ends the film in a very happy space.

A Superb dialogue on Donald Trump in climax made the audience connect.

Nani: He delivered good performance with his acting and with his coming timing in the film. He proved again as natural star.

Keerthy Suresh: She looks glamorous in this film. And also got good scope in the movie and  show her acting prowess.

Nenu Local is full length romantic, comedy and action entertainer. Musically Nenu Local is already a hit with Devi Sri Prasad’s tunes winning the youth’s mandate.  With so many things going good for the film, looks like Dil Raju and his team have a good enough project on the cards. Producer Dil Raju has ensured that Nenu Local has good production values. Nizar Shafi’s cinematography and Devi Sri Prasad’s background score and songs, the choreography of dance and action sequences, and Prasanna Kumar’s dialogues are the other attractions in this film.