Yogeshwar Dutt floors all with Re 1 dowry

Yogeshwar Dutt, who is known to be a trend setter, has set an example for the society by accepting a dowry of just Re 1 for his marriage. The London 2012 Olympic bronze medalist tied the knot on January 16. Yogeshwar said that he refused to take dowry and decided to take Rs 1 as token. The 34-year old wrestler got engaged with Sheetal daughter of Haryana’s Congress politician Jaibhagwan Sharma on January 14 in Sonipat. 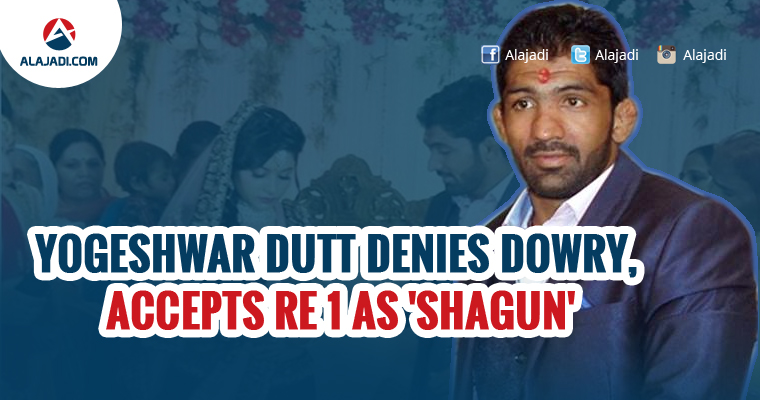 Yogeshwar saw his family struggle to collect dowry for the girls of the family, said the 34 year old who got engaged at Murthal in Sonipat on Saturday. As a result, I decided on two things while growing up I will excel in wrestling and I will not accept dowry. My first dream has been realized and now it is time to keep my second promise, Yogeshwar Dutt said. The Olympian said how he wished his father Rammehar Dutt and his first guru Master Satbir Singh had been alive to see him fulfill both his promises.

Yogeshwar’s mother Sushila Devi said his marriage was a special occasion and they would accept Re 1 as a mark of good omen from the bride’s family, but nothing else. Dowry system is perhaps the most pressing issue in our country. It is certainly one of the most prevalent and deep-rooted social evils. Although the Supreme Court has deemed it illegal, many still follow the ritual. It is a menace to the society.

Justifying his decision of taking Re 1 as a token of goodwill, Dutt wrote on Twitter: In Sanatana Dharma, on any auspicious occasion gifts are exchanged as good omen, and the one rupee I have accepted is nothing but for goodwill. It is not a dowry, so I request people to choose their words wisely.