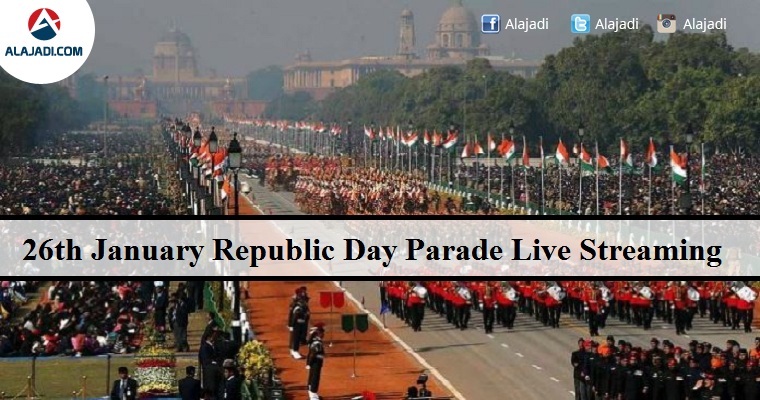 Ever year in this day, India celebrate Republic day. On January 26th, 1950, Indian Constitution came into force. The Republic Day 2017 parade will begin around 9 am AM following the flag hoisting. The parade begins from Vijay Chowk and moves on to the Red Fort grounds via Rajpath, India Gate, Tilak Marg, Bahadur Shah Zafar Marg and Netaji Subhash Marg. During Republic Day parade every year, critical defence systems, artillery, and equipment ranging from tanks to missiles are brought out for public display. This year, like in the past, the three wings of the armed forces will field their marching contingents and systems in the parade, followed by a cultural pageant and the flypast.

This year, The troops from UAE’s armed forces will march along with Indian troops on Republic Day. The UAE is the second country after France to send its troops to participate in the Republic-Day parade of India. You can watch the 68th Republic Day parade live in Rajpath on Doordarshan’s YouTube channel below, as well as on the Republic Day website. You can also watch President Pranab Mukherjee’s address on the eve of Republic Day on the website.
You can also see the event LIVE on all major News Channels in India. The translated version of Narendra Modi’s Republic Day 2017 Speech in different regional languages like Urdu, Marathi, Gujarati, Tamil, Telugu, Malayalam, Kannada, Bengali, Punjabi, Kashmiri, Oriya, etc will be available on regional channels of Doordarshan.