In a very shocking news, Tollywood actress Kajal Agarwal’s manager, Rozo Roni was arrested on Monday by Hyderabad police. He also worked as manager for other top heroines in the industry like Lavanya Tripati and Rashi Khanna. The SIT probing the high-profile racket has summoned 12 Tollywood celebrities so far. Rozo’s arrest becomes the 19th arrest in this drug racket. 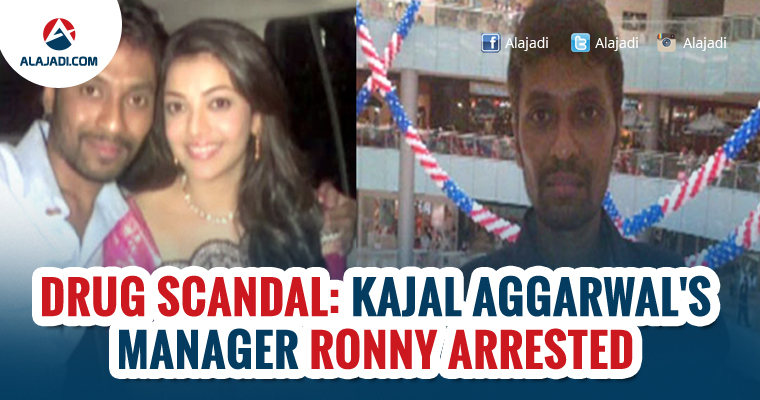 He was arrested by the SIT officials today and the drug racket case has taken an unexpected turn with his arrest. His residence in Hyderabad was raided today and Large quantities of ‘Ganja’ were seized from his possession apparently, at his residence.They suspect that he has close links with the drug peddlers.

Till now, 19 people have been arrested and 27 have been questioned by the excise department team probing the racket. Telugu actor Pallapollu Navdeep also appeared before the SIT for questioning on Monday. He is the third actor after Tarun Kumar and P Subbaraju to be quizzed.

Blood, nail and hair samples are also being collected by officials for further examination from all the actors that were questioned. Charmee Kaur and Mumaith Khan have also been served notices and will appear for questioning in the next few days. Mumaith being in Bigg Boss Telugu show, she was given one day permission by the organizers of the show which will be on 27th of this month.

On contrary, Charmee Kaur filed a petition against SIT probe asking permission to take her lawyers with her while she is going to the investigation and even while investigation. She has also stated that SIT officials should not be rude and force her for the samples of either blood or nail or hair.