A teacher produces 3223 Kg of rice in half acre land

Today, we see how the situation in the country known to farmers. To harvest also they don’t have invest for the farmers. The banks are not lending. By borrowing from someone and brought the money, sow the seeds, mix fertilizer, by sweating to cultivate crops, the lack of cost price, or the absence of fraud in the hands of mediums, among many things, such as agriculture, on farmers being the most difficult. It does not specifically say about them whom harvest in one acre of land drove in a paddy field. We know that 40 bags per acre, half acre is also not enough for the farmers to harvest as they are. There are many reasons for this. However, the female farmer from Tamil Nadu, with in half acre land only she farm 43 bags of rice harvested and sets the record. Yes, you heard right. A woman has achieved this feat. It is also a teacher, she was the one. 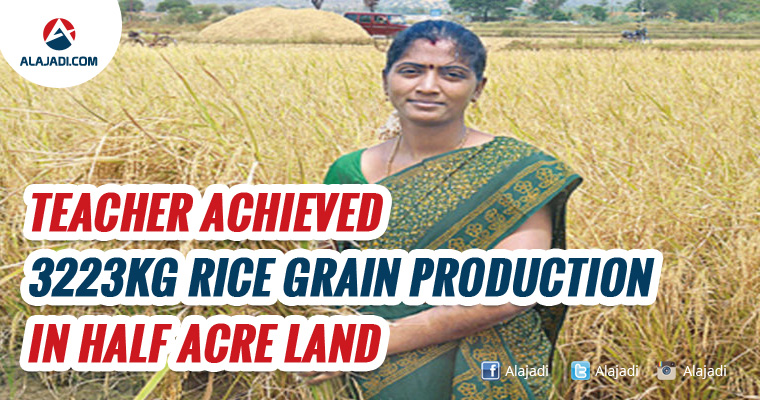 Her name is Prasanna. The residence of her is Tamil Nadu. She is science teacher working in a private school. From her childhood she would like agriculture. By her curiosity her father as taken to the field regularly. He joins her college to go to the field on a regular basis before attending college. In the process, she also completed MSc BEd and began a job as a teacher. Since she got married to a farmer as she is passionate on agriculture. The Tamil Nadu-based agricultural scientists, the discovery of new strains of the srivari the seed to grow it out to find out about the decision.

Together with the relevant authorities to bring the seeds of crops that roll. But Prasanna failed for the first two times. However, this time, she thinks the seed must get good yield. In order to this is she started avoided to ensure that the full range of artificial fertilizers, than organic fertilizers used. But this time, she had expected most of the yield. Approximately 40 bags an acre of paddy field is usually grown, but the cultivation of Prasanna, who, due to her half-acre farm with a 43 srivari seed bags (3223 kg) of rice grains produced. Everything done by Prasanna made in order to cultivate, she agricultural practices have also entered into the register. This was due to a record level of production is achieved in the end she also provided Rs 5 lakh cash. Prasanna has now focused on the drip irrigation. This is a system where the her desire to harvest crops and to get good name also. We need to hope that she would be fulfilled.