Want to learn how to tackle drought and produce fortune even in dry summers? Then this is the village you have to consider. A village so rich that most of them have cleared the loans taken from the banks without a waiver from the government just by the agricultural norms they have followed. This 400 year old small,self-sufficient, developed village is Ankapur in Armoor Mandal, Nizamabad district of Telangana which has catered a name “Mini-USA” because of the urban facilities they possess. 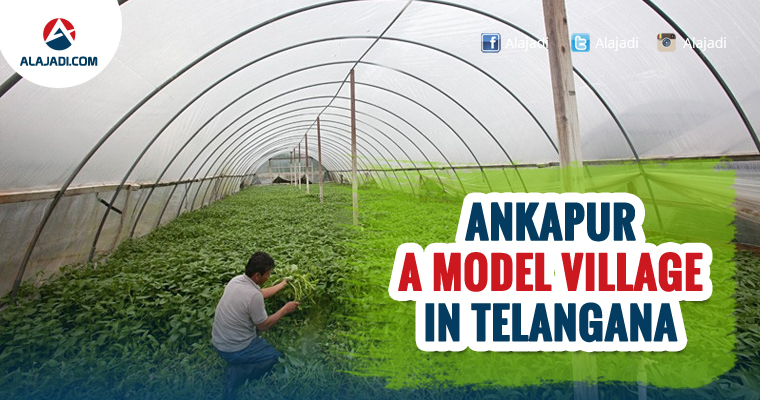 This village is considered as one of the model village in the country due to an overall development in general and agricultural development in particular by Indian Council of Agricultural Research (ICAR) under ICRISAT. It is recognized as a model village by International Rice Research Institute, Manila, Philippines. The farmers here have taken an offbeat path and adopted modern farming techniques in cultivating commercial crops like turmeric, maize, vegetables, sorghum, pearl millet,etc. on a large scale whereas Nizamabad is famous for being the rice granary for Telangana. Also this place is a home for seeds production. There are 22 seed processing units in the village.

The red jowar seed developed here is exported to northern India. Seed companies like Pioneer, Pro-Agro, Kaveriand Nuziveedu have processing units in the village. Because of these companies, the unemployment factor has been subdued to a larger extent. Apparently, the turnover for this industry is around a 100 crores! This village is also famous for other reasons. Being a beautiful village, there are several film shootings happening in and around this village. And the second is a country chicken delicacy on the village’s name, Ankapur Chicken is a popular Telangana dish.

This village is also financially rich and independent. Firstly because of their modern farming, they have had brilliant results. In one bumper crop season, the farmers have received great fortunes because of which most of them have bought cars. This village is one of the few villages to have brilliant literacy rate, with at least one NRI from each family! Yes, there are 500 people from this village who are studying and working in USA. This is the second reason for being financially independent, as the NRI’s have helped the villagers with finances and probably only village in Telangana to have an NRI portal. The village has beautifully built homes, roads and over 2000 acres of cultivable land. There is a Village Development Committee (VDC) or SarvaSamaj which is the decision making body of the village comprising of people from all religions and castes.

Here is a village that stands to be emulated, followed and appreciated for its unity, ability to change and adapt to latest technology – a torch bearer for farmers in other parts of India; A guiding light for villages too as every lane here is neat and clean, every household educated and yes, thatched roofs have given way to beautiful houses and happy homes. We all salute Ankapur and its residents and hope that the cheer catches on with others too!