Author: Sarika G
What are you ordering for breakfast? No matter where you are, chances are it’s a dosa — plain and simple or filled with aloo masala and paired with coconut chutney. That’s the finding of a recent survey of online breakfast orders in more than 12,000 restaurants across eight cities. And if not the dosa, most Indian households still prefer traditional dishes for breakfast: poha and parathas are favourites, fast food doesn’t quite make the list. 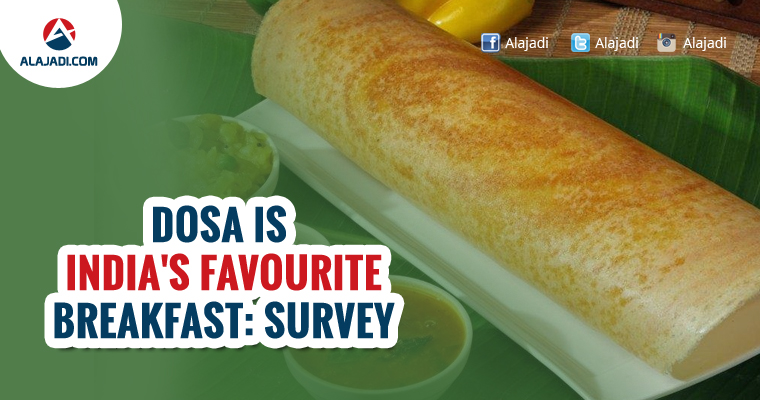 The survey, conducted by online delivery platform Swiggy, found that the dosa was a preferred option among the metros — Delhi, Mumbai, Chennai, Bengaluru and Pune — alongside other dishes. Delhiites also liked to order chhole bhature, while Mumbaikars went for bun maska and Puneites opted for sabudana khichdi. Bengaluru, which notched up the largest number of breakfast orders among the metros, preferred masala dosa, idli-vada and poha, in that order. Sheela Krishnaswamy, president of the Indian Dietetic Association, says traditional Indian breakfast patterns offer the most nutritious options. “It’s nice to know that people haven’t still given up on traditional breakfast that has a mix of carbohydrates, proteins and fibre,”she says, adding that people are increasingly realising the importance of a healthy, balanced breakfast. Breakfast orders are picking up pace and the segment is posting strong growth numbers. Indians know the importance of breakfast but probably, their hectic schedule makes it difficult for them to prepare the morning meal, says Srivats T S, vice-president of marketing at Swiggy.

The survey also found that breakfast orders peaked during weekends. Across cities, consumers are 30% more likely to order breakfast during weekends than on weekdays, with orders spiking on Sundays. What’s more, users typically spent 15% more on breakfast orders on weekends, and ordered 20% more quantity-wise as well. As for weekdays, Monday and Tuesday witness the maximum number of orders.

Traditional Food Is In Order:

Breakfast choices in the metros according to the survey:

* Women are 19% more likely to order breakfast than men

* Working professionals in the 25-34 age group are 40% more likely to order breakfast online than those aged 18-24
* Bengaluru, Chennai, Hyderabad and Kolkata order higher quantities on weekends, compared to the national average