Mahendra Singh Dhoni got into a new role on Monday. He was appointed the chief executive officer (CEO) of Gulf Oil India for a day. The former India captain reached the company’s headquarters in Andheri, Mumbai, on Monday to assume his new role. The wicket keeper batsman was dressed in a blue suit, white shirt and tie. As a CEO of the company for the day, Mahi has attended all the special meetings of the company. He will also take quite a few decisions, just like a real CEO, Arun Pandey, who manages Dhoni’s commercial interests, told Sport star. 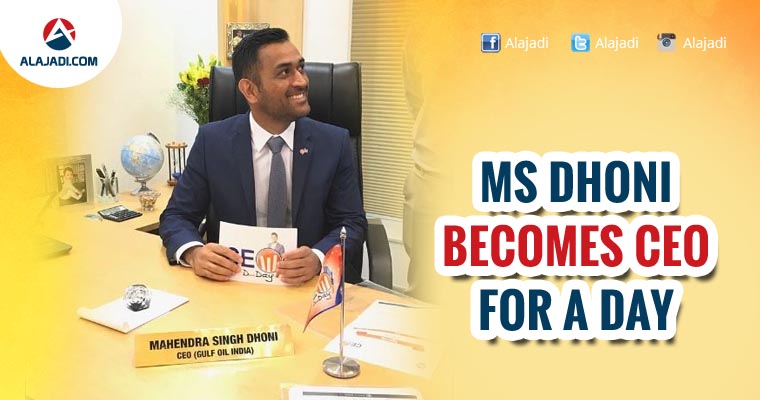 Dhoni, who will for Rising Pune Supergiant in the IPL this year, has been a brand ambassador for the firm since 2011. It even caught the employees of the company by surprise as it was kept a secret until Dhoni walked into the office, attended meetings and took some important decisions as well. His close friend and commercial interests manager, Arun Pandey, revealed that the company and star player had planned the special day for a long time.

Mahi’s association with the company goes back a long way, and for a long time, he also wanted to understand how a corporate CEO works. He wanted to try this out too. Pandey added. Dhoni has been associated with the automobile lubricant since 2011 when he was named the brand ambassador of Gulf Oil.

Dhoni last played international cricket when he took part in India’s third Twenty20 against England in Bengaluru on February 1. He had scored 56 to help India win the three-match series 2-1. Since then, the former India skipper took part in the Vijay Hazare Trophy where he guided Jharkhand to the semi-finals of the 50-over domestic tournament. He fared well in the tourney, scoring a century and a half-century. The 35-year-old, who led Rising Pune Supergiants last season, will now be seen playing new skipper Steven Smith in the upcoming IPL season. The Pune franchise will kickstart their campaign against Mumbai Indians on 6 April.