Low-cost airline Spice Jet has announced a sale on the occasion of its 12th Anniversary. Under the special discount offer, Spice Jet is offering deals on both domestic and international flights. The Spice Jet 12th Anniversary sale has started from today, May 23 and will go on until May 28, 2017. The airline is offering flight tickets with fares starting from Rs 12 only. You can book your tickets on all the five days of sale, and the offer is valid across all channels. While the offer is extremely lucrative, it is to be noted that Rs 12 is the base fare and excludes surcharge and other such charges. 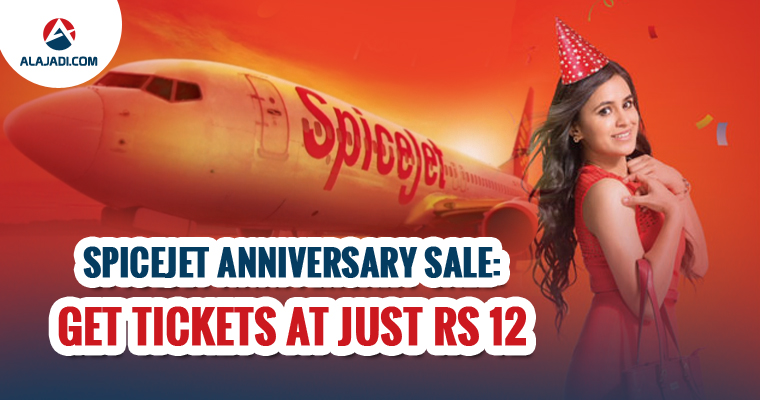 While the sale period of the offer is from May 23 to May 28, the travel period for which you can book the tickets is June 26, 2017, to March 24, 2018. The bookings that you make under the offer cannot be combined with any other promotional offers of the airline. There are many additional benefits which you can avail if you book your tickets via Spice Jet’s own website. Users will be able to get an extra 20 percent discount on Spice Max Meals, Seat Selection, and other Add-ons, using a promo code available on the portal. Also, HDFC bank card holders can get more deals. HDFC Credit card users can avail a Free Meal and Free Priority check-in when the flight ticket is booked on www.spicejet.com . Moreover, if you buy a ticket during the offer period, you also stand a chance to win free tickets and other such deals in a Lucky Draw.

With a fleet of 49 aircraft, SpiceJet operates 350 average daily flights to 39 domestic and 7 international destinations. Earlier this month, the airline was offering all-inclusive discounted fares starting from Rs 849 on select domestic destinations and vacation getaways. The travel period for that offer is between June 20 and September 18. Recently, Spice Jet had reported a 24 per cent fall in net profit at Rs 181.1 crore in three months which ended in December 2016 even as the second largest low-cost carrier had remained in the black for the eighth straight quarter.