RBI counters to continue to accept old 500 and 1000notes

Banned 500 and 1,000 rupee notes will continue to be exchanged for new currency at RBI counters even after the facility was withdrawn from all banks. The government had on Thursday announced that the demonetized 500 and 1,000 rupee notes can no longer be exchanged at bank counters and any holdings will necessarily have to be deposited in bank accounts. 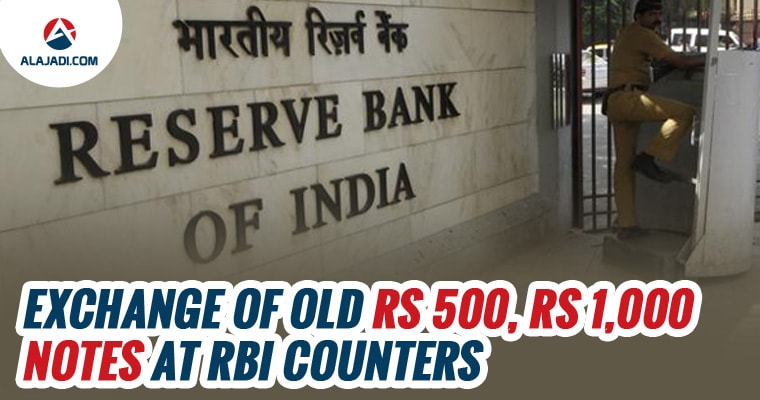 The Reserve Bank of India advises members of public that exchange of banknotes in Rs 500 and Rs 1,000 denominations, whose legal tender status has been withdrawn, will continue to be available at the counters of the Reserve Bank up to the current limits per person as hitherto, the central bank said in a statement.

Originally, the government had permitted the exchange of denotified Rs 500 and Rs 1,000 notes up to a limit of Rs 4,000, which was increased to Rs 4,500 five days later, only to be slashed to Rs 2,000 on November 17. As per an earlier press release from RBI, exchange of old notes was allowed till Dec 30, 2016. People will need to furnish their PAN card details if the total deposit amounts to over Rs 2.5 lakh after December 30.

According to Finance ministry, Rs 1,000 notes would no longer be allowed to be used for the list of exemptions the government had announced. These notes can, however, be deposited in bank accounts. Will encourage people who are still unbanked, to open new bank accounts, the ministry said.

Old Rs 500 notes can be used to pay fees at central government, state government, municipality and local body schools up to a limit of Rs 2,000. Fees for central or state government colleges can also be paid in old Rs 500 notes.  Apart from this, mobile phone top ups to a limit of Rs 500 per recharge have been allowed. Some limits to the exemptions were also announced. The payment of bills and arrears to utilities by individuals and households will be limited to just water and electricity. The road ministry extended the exemption on toll payments until December 2.

Foreigners will be allowed to exchange overseas currency up to Rs 5,000 per week with a record of the transaction being entered in their passports, the finance ministry said.