After back to back hits in 2016 with Premam, and Sahasam Swasaga Sagipo movies Chaitu now came up with the family entertainer. Naga Chaitanya’s Rarandoi Veduka Chuddam released today i.e; 26th May 2017. Rarandoi Veduka Chuddam is family drama directed by Kalyan Krishna who debuted as the director with King Nagarjuna’s Super film ‘Soggade Chinni Nayana’ and produced by Nagarjuna under his own banner, Annapurna Studios. Recently released trailer and songs of the film got a superb response from the audience and increased the hype of the film. For the first time, Chaitu and Rakul Preet working together for this film. 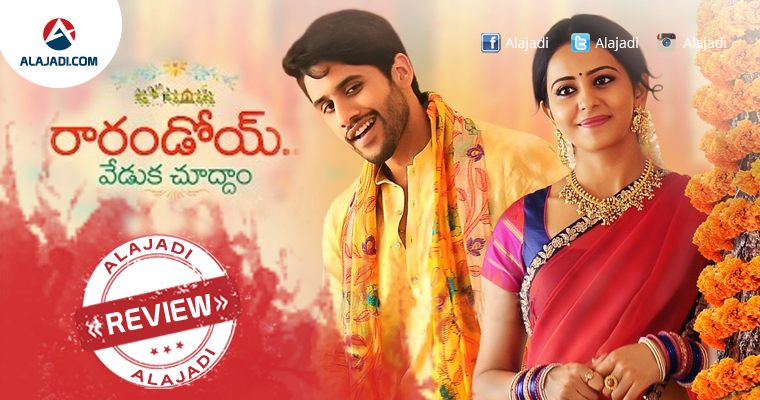 Rarandoi Veduka Chuddam is the typical love story between a city boy and a village girl but this time, it’s the union of two families as well. Shiva (Naga Chaitanya) has seen the character of a young guy from the city while hot diva Bramaramba  (Rakul Preet Singh) plays the character of a traditional village girl. Jagapathi Babu played a role as Chaitanya’s father and Rakul Preet is Sampath’s daughter. Their will be an dispute between Jagapathi Babu and Sampath. How this young couple unites together overcoming the problems is the basic story.

An expected out and out routine family entertainer with a predictable story line makes it as a one-time watch movie for this weekend. Decent entertainer with cool performances by Chaitanya and Rakul in hot summer! ‘Ammayilu Arogayaniki Hanikaram’ – the satirical one liner from Naga Chaitanya’s family entertainer Ra Randoi Veduka Choodam is currently hogging the limelight in Telugu media. We have to wait and see how director Kalyan Krishna justifies the jeering remark in the film.

Naga Chaitanya: He plays a character of a young guy from the city. His character suits him well.

Rakul Preeth Singh: She plays the character of a traditional village girl, which suits her very well.

Rarandoi Veduka chudham is a village based movie. There is no novelty in the story, but the director did a decent job with the treatment. Music is composed by Devi Sri Prasad. It was Naga Chaitanya’s third collaboration with music director Devi Sri Prasad after 100% Love, Dhada and first collaboration with Kalyan Krishna Kurasala. Devi Sri Prasad is the man behind the peppy yet heart-warming album. The ones we have heard so far have been foot tapping and soulful. The songs have given us a good glimpse of what’s to come. The production values are great.  BGM is the highlight of the movie.