Yoga guru Baba Ramdev defeated Beijing Olympic silver medallist Andrey Stadnik 12-0 in the exhibition bout in Pro Wrestling League season two on Wednesday. Yoga guru performed ‘Surya Namaskar’ before starting his bout. He opened his account with four points and was quick as he took his points tally to 7-0. While it was an exhibition match, one could clearly make out that Andriy never put an effort to score a point against Ramdev. He, only once, tried to move out of a hold of Ramdev with a flip, a move that drew a loud cheer from the crowd. 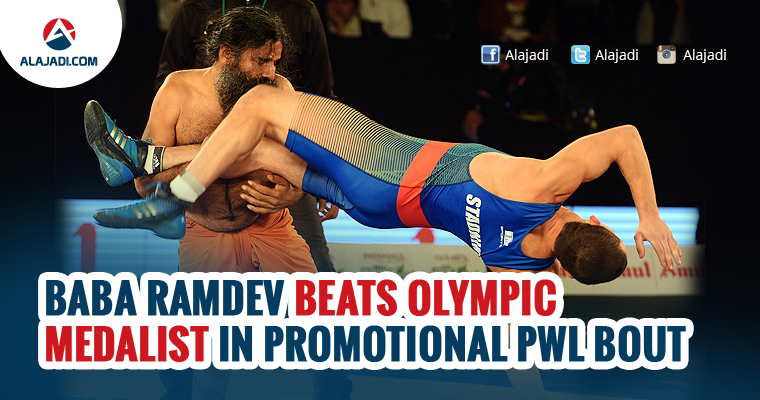 Later he added that wrestling will excel in the upcoming years and will become one of the most followed sports in the world. Baba Ramdev’s and Stadnik’s bout was scheduled after Pankaj Rana and Pritam’s bout, which the Punjab wrestler Pankaj won the match on points difference and helped his side make it into the final for the first time. Andrey had defeated wrestler Sushil Kumar in Beijing. He had reached the finals, giving Sushil an opportunity to play in repechage and won a bronze medal. By doing so the India wrestler became the first India to win a medal in wrestling. This is not the first time Baba Ramdev challenged an international wrestler. Earlier on the occasion of 20th anniversary of his Ashram in Haridwar, he had challenged Indian-wrestler Sushil Kumar in 2016.