If it is Shah Rukh Khan, it has to be big. His new film Raees has been in the making for a while and has created news much before the film’s trailer came out. Having braved injuries on sets, protests, political interference – the film is finally up for release. Directed by Rahul Dholakia, the story is based in Gujarat in the late 1970s and 1980s. SRK plays bootlegger – a character loosely based on real-life gangster Abdul Latif. Nawazuddin Siddiqui plays a cop whose sole mission is to arrest Raees. The film also marks the debut of Pakistani actress Mahira Khan. 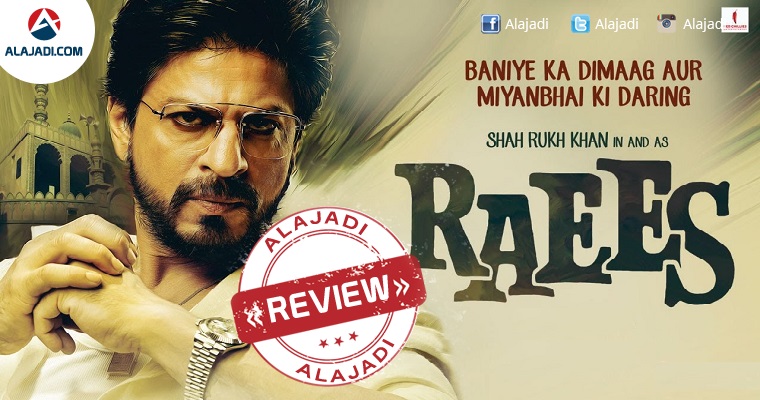 Raees (Shah Rukh Khan) is a bright child, who early on in his school going years learns the trade of alcohol in a dry state (Gujarat). After working under a popular liquor smuggler (Atul Kulkarni) in his early years, he soon decides to start his own business. His only rule, Koi dhanda chota nai hota, aur dhande se bada koi dharam nai hota, jisse kisika bura na ho.

His growing success is rightly caught by Superintendent of Police Jaideep Ambalal Majmudar (Nawazuddin Siddiqui). Thus, begins a cat and mouse chase between the two. While Raees’ street smart ways and political network work in favor, Majmudar’s patience in following up with the criminal is a true laudable value. Will Majmudar be able to nail Raees? Can Raees be tamed?

If you are in the mood to watch an intense Shahrukh Khan doing some hard-core ‘dishoom-dishoom’ and mouthing dialogues like ‘Din Aur Raat Logon Ke Hotein Hai, Sheron Ka Zamaana Hota Hai’, then Raees might be your pick for this week. Raees scores low when it comes to music. Barring Sunny Leone’s Laila, none of the other tracks stay with you post the film.

Shahrukh Khan: He looks dreamy as Raees. His kohl eyed look suits him. Coming to the acting bits, he particularly excels in scenes where he shows extreme anger and also the one where he breaks down.

Mahira Khan: Her acting was okay in this film. She gives you too many ‘yawn’ moments. A not-so-impressive Bollywood debut by Mahira!

Nawazuddin Siddiqui: He is at his impressive best and gets some of the best dialogues in the film.

Zeeshan Ayyub is a great actor and as the sidekick, once again does his job well. Atul Kulkarni, Sheeba Chadda, Uday Tikekar put up a great supporting cast. Sunny Leone sizzles in her item number Laila.

Raees would have been a way better film had the makers focussed more on the writing bit. While the film is high on some good performances, the lethargic screenplay dampens some of your excitement. At times, the narrative suffers from a dip and you wish for some pace in the story-telling. The action scenes are more physical and loud. The film has a couple of whistle-worthy dialogues which keeps you entertained. K.U Mohanan’s cinematography is top-notch and perfectly captures the more real side of Gujarat rather than falling prey to the vibrancy. The editing scissors could have made the film more crisper.