No more red beacons on VIP vehicles from 1 May

In a recent development, the Narendra Modi-led government on Wednesday banned the use of red beacons atop vehicles of ministers and other VVIPs, including that of the Prime Minister. It will be implemented from May 1, 2017. The decision was taken by the Union Cabinet and the ban is applicable to union ministers, chief ministers, state cabinet ministers, bureaucrats and judges of the High Court and Supreme Court.

We are removing the rule which allows state and central government to specify who can use the red lights, finance minister Arun Jaitley said, addressing the media. From May 1, no vehicle will have a red light. There will be no exceptions. Beacons, however, will be allowed on vehicles concerning emergency and relief services, ambulance, fire service etc. 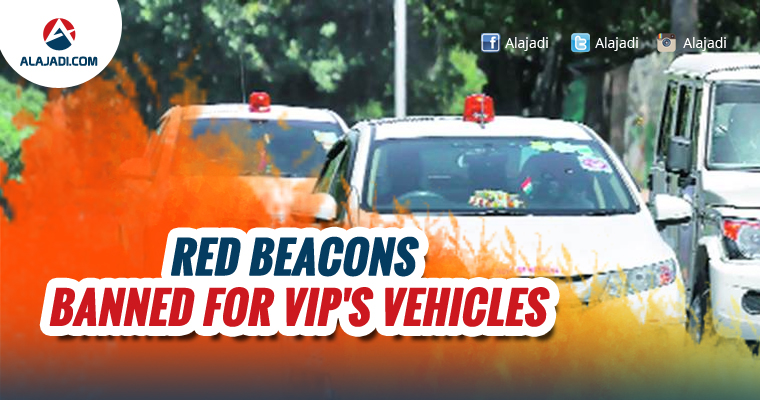 In a historic decision, the Cabinet has decided that beacon lights will be removed from all vehicles, barring emergency service vehicles, from May 1, Road Transport and Highways Minister Nitin Gadkari said. The government is of the considered opinion that beacons on vehicles are perceived symbols of VIP culture and have no place in a democratic country. They have no relevance whatsoever, Gadkari added.

About six categories of beacons primarily red, blue and yellow are in use in India. But the red, or the coveted “lal batti”, has been drawing maximum attention as an elitist VIP symbol since the British rulers introduced it. Gadkari stated that a detailed notification in this regard will be issued soon and there is no need for any amendment in the Motor Vehicles Act. This move is directly in line with the Prime Minister’s vision of a transparent government, where no leaders enjoy additional benefits. Punjab government, led by Capt Amarinder Singh, already abolish the use of red beacons after coming to power as promised in by the Congress party before the assembly elections.