Indian travelers will not be eligible for visa-free entry to Hong Kong, a special administrative region of China, from January, when a “Pre-arrival registration” process will be put in place. Indian nationals can currently enter Hong Kong without a visa for a period of up to 14 days. The Pre-arrival Registration for Indian Nationals will be implemented on January 23, 2017. The online service for Pre-arrival Registration for Indian Nationals’ is now opened, Hong Kong’s immigration department announced on its website. 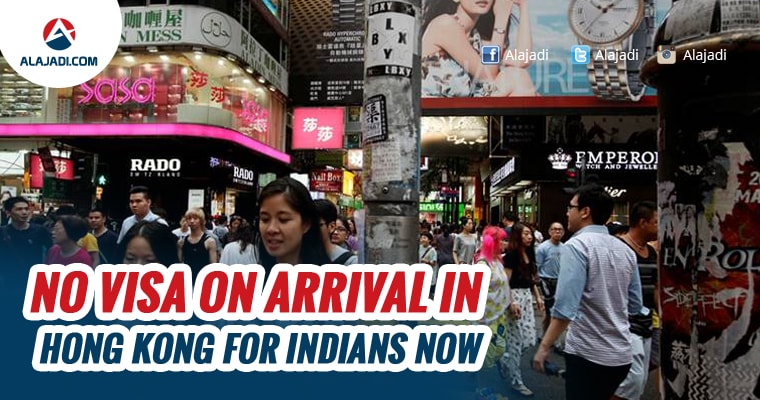 The new rules will affect hundreds of thousands of Indians who visit the former British colony every year for tourism and trade. According to the latest figures, 5,61,625 Indian tourists visited Hong Kong last year, a rise of 22% compared to 2013. In the first 11 months of this year alone, 474 615 Indians visited the city.

Immigration department assistant director Ma Chi-Ming told the South China Morning Post newspaper that India was chosen as a testing point because it is one of the major sources of asylum-seekers. We do not rule out extending the scheme to other countries in the future, he said.

This is the first time Hong Kong has implemented such a restriction for a country. Among the total of 10,335 pending refugee applications in the city, 80% are from India, Pakistan, Vietnam, Bangladesh and Indonesia. The only Indians exempted from pre-arrival registration are holders of diplomatic or official passports or a Hong Kong Travel Pass, and Indian nationals who have successfully enrolled for the e-Channel service for frequent visitors.

Last year, Hong Kong authorities had dropped plans to scrap visa-free entry for Indians after representations from business and tourism bodies. Indian visitors are among the largest spenders contributing to the local economy. Giving fake information on the registration form is liable to prosecution, Ma said, adding those who use a false instrument could face 14 years in jail.