Gautham Nanda teaser, one of the much awaited and most talked about film of the year from director Sampath Nandi and macho Gopichand is out just now corresponding to Gopichand birthday today. The most anticipated teaser of Gopichand’s Gautham Nanda has been unveiled. Living up to all the expectations, the teaser is simply superb. Gopi looks so stylish and suave. With grand visuals and less dialogues, the teaser is pretty impressive. Director Sampath Nandi has shown Gopi in never-seen-before role. 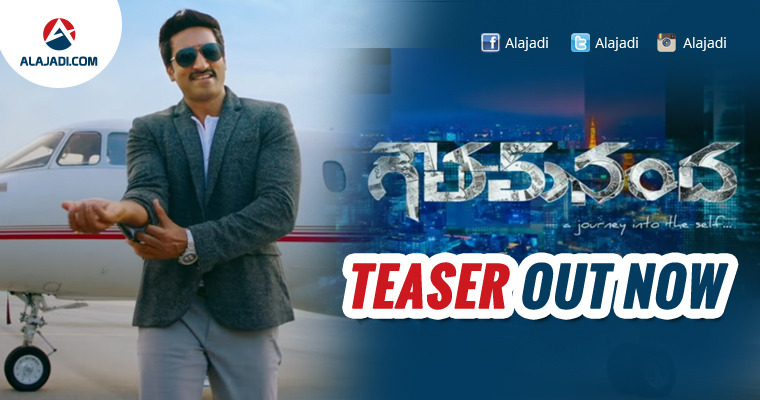 Just one word and the teaser is spellbound dealing with eternal truth of life… Dhanam Moolam Idam Jagath. From the very first visual till the last in one minute odd teaser, every frame is filled with large scale grandeur shot in never seen exotic locations. Nevertheless, Sampath also introduced us to the core story point by stressing on the above said Sanskrit sloka. Hansika and Catherine Tresa are seen as female leads. While Catherine looked as rich brat, Hansika is seen as simpleton.

Sampath Nandi seems to have touched the role and importance of money in our lives, a point which is sure to connect all the sections alike. Apart from content, Gopichand’s mindblowing look, stylish costumes and depth in two different getups is a new discovery on his heroic stature. Sampath Nandi’s direction touched all time a new high exploiring best in his characters. Especially, the technical standards he adopted is overwhelmingly impressive.

Producers J Bhagawan and J Pulla Rao of Sri Balaji Cine Media banner are quite confident on the film. They expressed content over the film’s progress which wrapped up its shoot except two songs. Billed to be an action entertainer made on high technical standards and top notch production values, the teaser has couple of one-liners. Apparently, the film revolves around the money. The colorful teaser is sure to touch a new spike on audience expectations level and can be a game changer for both Sampath and Gopichand careers.