Getting into film industry is a tough task and it requires a lot of luck with minimal talent. Without luck even an actor on par with the greatest actors of the industry cannot get into the industry. There are many ways to do so. One simple way is having someone influential in the industry or having a powerful and rich background to support. Ganta Ravi Teja who is son of Andhra Pradesh minister Ganta Srinivasa Rao is debuting into industry with Jayadev, a film directed by Jayanth C Paranjee, which is also said to be a remake of Vijay Sethupathi starrer Sethupathi, a Tamil film which was a good hit with a powerful content. This movie is coming into theatres today. 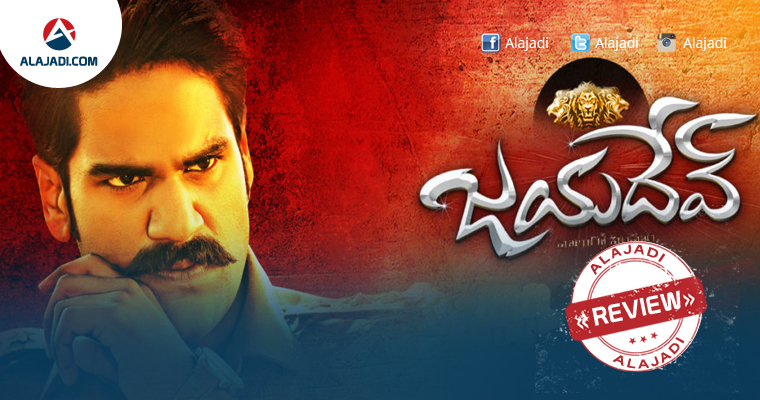 Jayadev(Ghanta Ravi) is a sincere police officer who gets involved in a deadly murder case of a cop. Upon his investigation, he comes to know that a dreaded liquor don(Vinod Kumar) is behind all this. Rest of the story is as to how a sincere and simple sub-inspector like Jayadev tackles the mighty Don and puts him behind the bars. How he solve the case? Why is he suspended? How he gets back to police department? Answers to these questions form the rest of the story.

Jayadev is the official remake of Vijay Sethupathi starrer “Sethupathi” which was a super hit in Tamil. It’s content is so gripping and interesting which is spoiled in Jayadev with the expressionless hero and unimpressive direction. There is nothing in Telugu remake which qualifies upto the level of Sethupathi. Director is only focused in introducing a son of politician as hero and he failed in executing the gripping story in a convincing and interesting way.  Jayadev is a too heavy subject for a debutante like Ghanta Ravi. He should have chosen a simple film to make his entry in Tollywood. Even though he tries hard in his role, the disappointing narration and lack of any gripping moments take this film down and makes it a strictly below average watch this weekend.

Ghanta Ravi: He is okay and has a long way to go in terms of acting. He has a good physique and will nicely fit serious roles if used well.

Malavika Raj: She looks quite glamorous and provides good eye candy for the audience.

Vinodh Kumar is nice in his role. Posani Krishnamurali and Vennela Kishore tried to generate comedy and they succeeded to a bit. Siva reddy is good and Supreet is nice. All other actors performed to the extent of their roles.

Production values of the film are just average. Music of the film is okay and so was the background score. Camera work was pretty decent and showcased the cop set-up in an interesting manner. Editing is pathetic as at least 15 minutes could have been easily chopped off. Coming to the director Jayant C Paranji, he has just sleep walked through the film and his lack of grip on the script is clearly visible in this remake. The cinematography is bad and so is editing. Dialogues are okay.