The Center on Thursday decided to reduce the maximum limit of old currency notes to be exchanged from the current Rs 4,500 to Rs 2,000 from Friday i.e November 18th, 2016. Addressing a press conference here, Department of Economic Affairs Secretary Shaktikanta Das said Rs 2.5 lakh in cash could be withdrawn from bank account for a marriage during the ongoing wedding season. Das said that to ensure sowing in rabi season, the government had allowed farmers to withdraw Rs 25,000 a week against the crop loan/kisan credit cards. 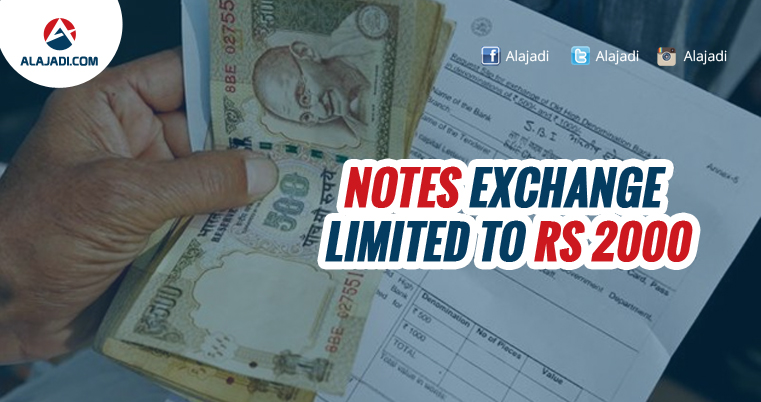 Government has decided that time limit in crop insurance premium cases will be extended by 15 days. Farmers can withdraw Rs 25,000 per week from account where farmers receive either by cheque or which is credited by RTGS accounts. Maintaining that there is enough cash with the government, he further said that central government employees up to group C can draw salary advance up to Rs 10,000 in cash that will be adjusted against their November salaries.

The decision comes a day after the government directed banks to put indelible ink mark on the right index finger of persons to screen them from using the exchange facility more than once. Since the day Rs 500 and Rs 1,000 notes were demonetized, a lot of representations have come to the prime minister and finance minister to ease withdrawal norms for wedding purposes.

Stating that the task force has held a meeting and a road map has been formed to re-calibrate all ATMs Das exuded confidence that it will be done soon. The central government’s decision to scrap old Rs 500 and Rs 1,000 notes had caused unspeakable misery to ordinary public. The cash withdrawal related stress has already seen the deaths of 47 people across India.