Dear Zindagi Take 1 Teaser is Out !

Shah Rukh Khan and Alia Bhatt’s Dear Zindagi is that oasis of peace in the middle of a crazy, fast-paced life. It is that moment when you meet yourself. It is the feeling you get when you play with a child. It is the mood that envelopes you when you land in Goa on a hard-earned vacation. 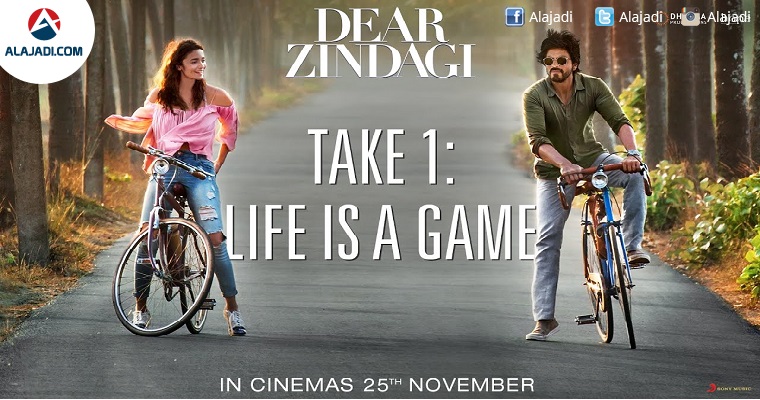 Alia Bhatt wants to be free, SRK is wrestling with the ocean and we are just happy after watching Dear Zindagi’s Take one, read first teaser. The video of Dear Zindagi is about 1.31-minutes long and that is enough to give you an idea what to expect from the Gauri Shinde film. Her next after Sridevi-starrer English Vinglish is again about its female protagonist. Alia Bhatt is a girl with the questions, Shah Rukh Khan is the man with the answer. He also seems to be her shrink. Can we have what she is having too?

The film’s tagline: ‘Life is a ride, you gotta keep moving’ is already trending. Alia and SRK’s earlier videos had us all intrigued too. She came with questions such as why are Mondays blue or why are Tuesdays impatient. Shah Rukh’s quirky answers were delivered from shower or when he was just up after good night’s sleep. He then promised an orange Wednesday and the vibrant color has truly taken over our day with Dear Zindagi teaser.

Earlier, it was said that will see Pakistani actor Ali Zafar — who is playing a key role in the film — in the film’s trailer. However, it has now emerged that there will be no trailers at all, instead the film will have a series of teasers. They have decided not to take the conventional route for this movie. We will release small videos titled Dear Zindagi take 1, take 2, take 3 and so on… The idea is to invite the viewer bit by bit into the experience of the film… It was Shah Rukh’s suggestion and I was with him on that.