Anchor Laasya gets engaged with her SoulMate

Popular Telugu TV anchor Lasya gets engaged today with her soulmate. After hosting a number of TV shows, events and film occasions, for some unknown reasons, the anchor suddenly went behind the stage. Today she surprised everyone with her engagement news. 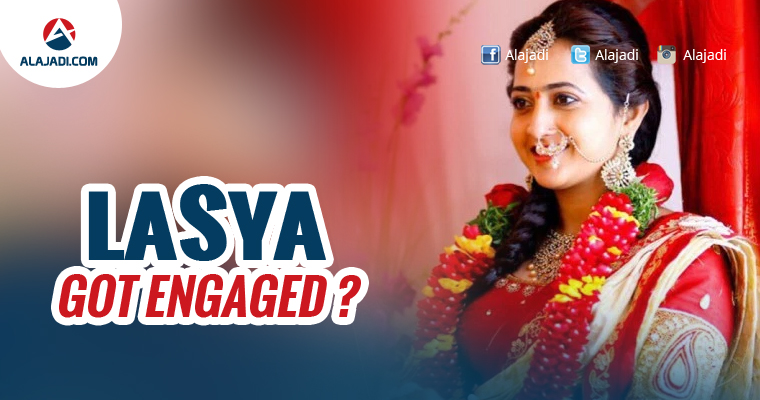 She posted an image of her from the engagement ceremony and said the good news “#Love is precious” and an “#engagement is an exciting step towards a marriage”…!! hopefully filled with #passion, #love,#happiness. #CelebrationOf❤️ Picture Credit : Moment Makers, Outfit designed by : Eeshwari “

Yesterday she said “Getting Ready for a special day feels good ? Getting Engaged with my Soul Mate…!☺️  Feeling Excited ??☺️ ” It is quite a good news for all her fans.  Everyone congratulated her in Facebook and many wishes flowed in. She has not revealed the name of her fiance yet. However, there is no official confirmation or photos regarding this except her posts in social networking handle. She has been favorite for many young boys in AP and Telangana with her anchoring. She became famous with ‘Something Something’ in MAA Music along with anchor Ravi.

Meanwhile, on the work front, she is set to stage a comeback soon and is already starring in a movie titled Raja Meeru Keka from the makers of Guntur Talkies. All her fans are waiting for her comeback. She is doing her debut under the direction of Krishna Kishore T. and young actors Revanth, Noel and Mirchi Hemanth will be seen in the lead roles. Tarak Ratna is playing the role of antagonist. The film will be produced by Raj Kumar M. under RK Studios banner. Talented music director Sri Charan will compose the tunes.

“#Love is precious” and an “#engagement is an exciting step towards a marriage”…!!hopefully filled with #passion,…