Big B Writes Heartfelt Letter To His Granddaughters

Amitabh Bachchan, 73, has written an open letter to his granddaughters Navya Naveli, 18, and Aaradhya, 4, filled with wisdom, good advice and life lessons. He writes about the difficulties both the girls will face despite their family legacies and how they must rise above them by making informed choices.

The actor writes to his granddaughters that even though they bear famous surnames, the world would tell them to behave in a certain way because they are women. The actor asks them to make their own mistakes, make their own judgement and marry only when they want to and not when people ask them to.

Bachchan ends the note by saying that as the next generation of women, it’s up to them to challenge and change the staid notions that society will impose on them, and that he’ll be ‘honoured’ to be known as ‘Aradhya and Navya’s’ grandfather’ than be remembered just as Amitabh Bachchan. 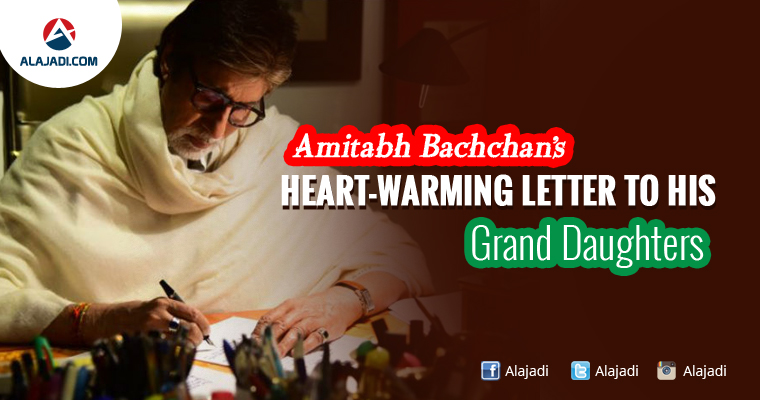 Here’s the full text of the letter:

Both your Par Dadajis’ gave your present surnames celebrated fame, dignity and recognition !

Both of you maybe a Nanda or a Bachchan, but you are also girls…women !

And because you are women people will force their thinking, their boundaries on you.

They will tell you how to dress, how to behave, who you can meet and where you can go.

Don’t live in the shadows of people’s judgement. Make your own choices in the light of your own wisdom.

Don’t let anyone make you believe that the length of your skirt is a measure of your character.

Don’t get married for any other reason other than you want to get married.

People will talk. They shall say some terrible things. But that doesn’t mean you have to listen to everyone. Never ever worry about – Log Kya Kahenge !

At the end of the day, you are the only one who will face the consequences of your actions, so don’t let other people make your decisions for you.

Navya – the privilege your name, your surname offers you, will not protect you from the difficulties you will face because you’re a woman.

Aaradhya – by the time you see and understand this, I may well not be around. But I think what I am saying today shall still be relevant.

This may be a difficult, difficult world to be a woman. But I believe that it is women like you that will change that.

It may not be easy, setting your own boundaries, making your own choices, rising above people’s judgement. But YOU !…you can set an example for women everywhere.

Do this and you would have done more than I have ever done, and it will be my honor to be known not as Amitabh Bachchan, but as your grandfather !!

With all my love

Your ….Dadaji ….your Nana

Watch: Amitabh Bachchan reads out letter to Aaradhya, Navya Naveli and all granddaughters: