Ace Director Ram Gopal Varma’s latest Bollywood movie Sarkar 3 has releasing worldwide today. Sarkar 3 is a political crime thriller film and it is the third installment of the Sarkar film series which started in 2005. directed by Ram Gopal Varma, and co written by Ram Gopal Varma, and Nilesh Girkar. Two fictional characters are looked at a size of larger than the life on Indian screen. They are larger because, they cannot be restricted to one film, but flow perennial as sequels. One is Baahubali and the other is Sarkar. The difference is- Baahubali doesn’t belong to current times, but Sarkar does. 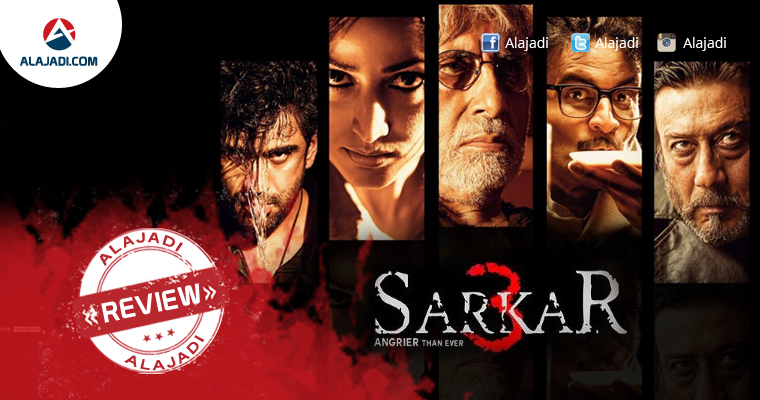 Subhash Nagre or Sarkar (Amitabh Bachchan), the patriarch of the most powerful political family of Maharashtra, continues to hold centre-stage because of his immense clout with the masses. In this outing, the Godfather is joined by his grandson Shivaji Nagre(Amit Sadh), who loves and hates his grandfather with equal intensity. Will Shivaji betray Subhash? Or will he become a prey to his grandfather’s machinations?

The approach RGV chose to narrate this film appeals to the audience those really can focus on every small detailing in dialogue and scene conceiving. It’s for the brainy audience. The film naturally doesn’t go into heads. It requires keen focus to understand and experience the nuances of every aspect. No songs, no romance, no love track…it’s out and out political drama within the family. The climax makes the audience fulfilled. This film is for serious film lovers who can handle this genre, but not for those who long for laughs and romance between main leads.

Amitabh Bachchan: He is the encyclopedia of acting as an Angry Sarkar.

Amit Sadh: He nailed it with outstanding performance.

Parag: He  gave his best performances in this flick.

Yami Gautam & Rohini‘s: They performances also added the much-needed solidness to the story.

Jackie Shroff: He is adequate.

Ram Gopal Varma delivered something that which he only can do. This is the story of aged Sarkar who comes out from the shackles of conspiracies to end him. But what intelligence he applies and to what extent he goes is the matter. But film has poor scripting work. On technical front, Sarkar 3 has good production values and Ravi Shankar’s background score, Amol Rathod’s picturization and Anwar Ali’s editing are the attractions. Dialogues are worth underlining but RGV found repetitive in some scenes and dialogue.