Nine months back in March this year, when Tapeshwar Singh started an extensive search for his missing wife Babita , no one was sure that he could really find his wife. As it was an attempt to find a needle in a haystack. But destiny had already decided to reward the man for his long and extensive search. Tapeshwar Singh hails from Bihar and is settled in Meerut where he does odd jobs to make end meet. He and Babita got married three years ago when he saw her near Dharamshala, abandoned by her relatives. But it came as a shocker for Singh when Babita disappeared one day, who was suffering from a mental disorder 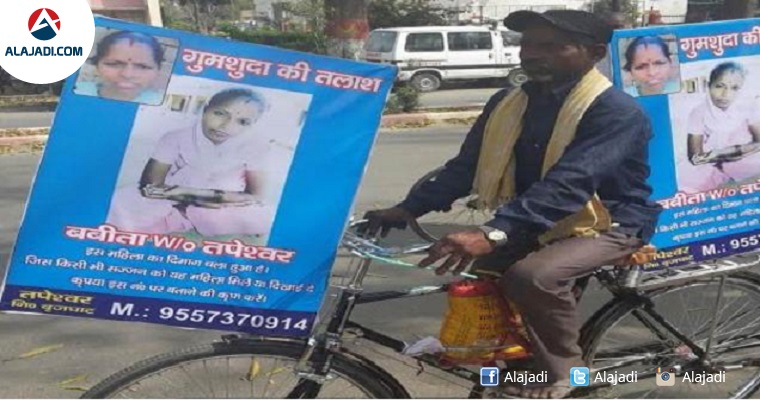 In March this year, she disappeared without a trace. A 40-year-old man found his wife after nine months of searching for her on his bicycle, day and night. With her posters hoisted on two rods, Tapeshwar started looking for her on a bicycle. He would cycle for hours in search of her and sometimes didn’t have money for food or water. He spent all his savings towards the search. All that kept him going was hope and love.

One day Tapeshwar was informed that Babita had been taken away by a pimp to be sold off at a red light area. He visited many brothels but couldn’t find her. He later discovered that she was indeed taken away, but the deal didn’t go through because of her mental condition. Even after filing a FIR, there were no leads.

He was wandering the lanes of Haldwani looking for her when to his utter disbelief and surprise, he found her sitting alone by the roadside. Her clothes were in tatters, and she wasn’t sure how she had reached there, but she was jubilant to be back with her husband.