Shravana Mas is a very special month for newly married woman . This month comes usually in the month of August. Full moon day occurring with the Shravana star is known as Shravana Masam. Every day of this month is very auspicious. Shravan star is believed to be very auspicious star in which Lord Vishnu was born. Also, Lord Brahma had seen Lord Vishnu for the first time on the day of Shravan star. Lord Govinda form also took place in the same time. Lord Govinda stepped in Tirumala hill in search of Goddess Maha Lakshmi on the day of Shravan star.

In olden days Shravan mas is meant to be auspicious month to start learning so upakarma takes place in this month to start studying Vedas, Shravana Masam is very special for Goddess Lakshmi and Goddess Gowri Devi. 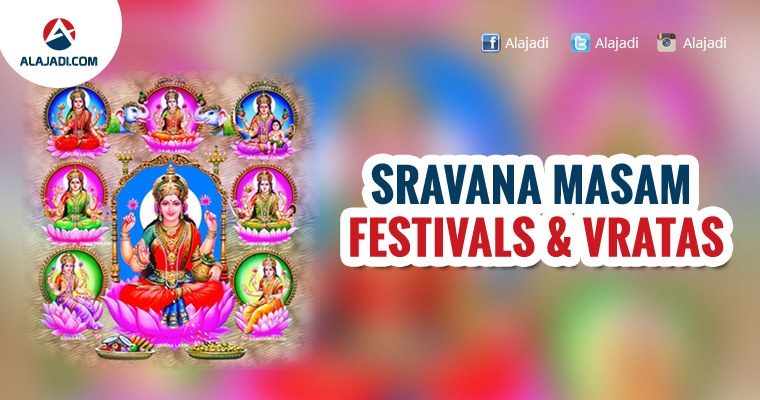 Ashada masam, known for separating newly married couples where as Shravanam joins them. Festivals’ beauty is brought by Shravanam. It is so precious. Shravana means listening and this is an art. A good listener is a good decision maker. As a wife known for forming a good family, she likes Shravana amongst all. The festival in this month are so popular and precious. Monday is precious in Karthika Masam, Thursday is precious in Margasira Masam, likewise all Mondays,Tuesdays,Fridays,Saturdays are precious in Shravanam.

Shravan is the most important month for women. Women who perform vrathams in this month will bestowed with all happiness and  prosperity.

The first and foremost festival in Shravanam is Garuda Panchami. Lord Garuda, who had worked hard to release his mother from servant work, and so had become the vahanam(vehicle) for Lord Vishnu and a purana is named after him, Garuda Purana.This day(Shravana Sudha Panchami) we should pray Lord Garuda to get (Win) strength ,Courage.

Shravana Sudha Saptami is good for praying  Lord Surya(sun). Shravana Sudha Ekadashi (Putradhi Ekadashi)  is well known for Ekadashi vratam to be booned with children for childless.Donating umbrella is precious.Shravana Sudha dwadashi(Damodara Dwadashi) for praying Lord Sri Hari and to pray Goddess Parvathi and Lord Shiva on Tryodashi and Chaturdashi.

It is the worship of goddess of wealth. It is celebrated on the last Friday of the bright fortnight in the month of Ashada, corresponding to the English month of July-August. The worship of Maha Lakshmi is performed by married ladies to obtain good progeny, and for the long life of the husband.

Pournami in shravanam is also known as Rakhi Pournami or Jandhyala pournami. Rakhi Pournami, the day on which sisters tie a raksha bandhan(rakhi) to their brothers which means brothers have to safeguard their sisters’ lives.

Jandhyala Pournami, a festival for a married man who has got the upanayanam done and he has to change his jandhyam or Yagnopavetham on this auspicious day and do Gayathri mantra Japam. Hayagriva (Knowledge god) and Santoshi Matha had taken their forms on this auspicious day. Maa Lakshmi had been given control on money and Maa Sarawasthi had been given control on Education (Knowledge) by Hayagriva on this day. Sage Agasthya preached with Lalitha Sahasranamam by Hayagriva on this special day.

Mahavishnu took various avatars to protect the mortal world from the evil-doers and sinners. The eighth incarnation was his birth as the child of king Vasudeva & Devaki. The birthday of Lord Krishna falls on the eight day of Shravan Krishna i.e. the dark half.Due to his immeasurable roles played in this world, he is regarded as a complete manifestation of God. It has been calculated that Sri Krishna was born on  Wednesday, the eighth day of second fortnight in Sravana month in the year of Visvavasu (on  July 19th 3228 BC (BCE)).  He lived for 125 years and discarded his mortal coils on February 18th 3102 BC on the new moon night of Phalguna. His death was the onset of the current age known as Kaliyuga.