7 Soldiers Killed In Terror Strike At Army Base Near Jammu

In an attack quite reminiscent of the Pathankot terror strike, 7 Indian Army soldiers, including 2 officers, were martyred in a fresh terror attack at an army base in Nagrota, Jammu, just 20 kilo meters from Pakistan border before dawn on Tuesday. Up to four heavily-armed terrorists, suspected to belong to a fidayeen or suicide squad dressed in police uniform, reportedly entered two army buildings where there were officers’ families, and opened fire at the officers with guns and grenades. 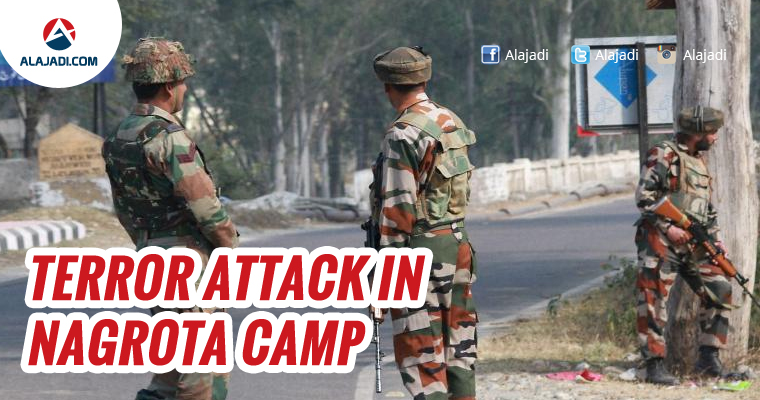 Following the terror strike, a huge hostage-like crisis erupted for several hours and the soldiers rescued 2 women and 2 children in the operation. Army chief General Dalbir Singh Suhag briefed PM Narendra Modi and Defence Minister Parrikar about the attack this evening. The Nagrota base is one of 4 command centres in J&K and houses over 1,000 officers. The base is the headquarters of the army’s 16 Corps, a huge military formation that defends the borders and fights terrorists in the greater Jammu region.

The first attack took place in Nagrota where heavily-armed militants stormed into a fortified Army camp wearing police uniform. The camp is located just three kilometres away from the headquarters. According to Army officials, the militants lobbed grenades, fired using automatic weapons and gained entry into the camp. Once inside, they started firing indiscriminately at the Officers’ Mess, in an attempt to inflict maximum damage. One officer and three soldiers were killed in the attack,” said Col NN Joshi of the Northern Command.