The Conclusion of the magnum opus Baahubali is at an all time high as Indian cinema fans are eagerly waiting for the epic conclusion. This year’s most awaited film Baahubali: The Conclusion has been cleared by the Censor Board. The regional Censor Board has passed the film with U/A certificate and the film has a run-time of 170 minutes and 51 seconds i.e 2.50 Hours. 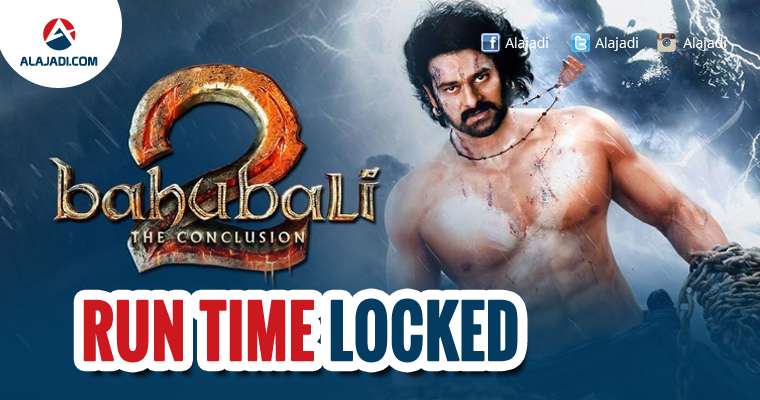 The latest we hear is that the film’s run-time is 170.51 minutes which means it is 2.51 hours. This is certainly very longtime considering that the run-time of the most of the recent films was around 2.10 hours including Krish’s historic film Gautamiputra Satakarni and several other commercial films that released in 2017. It has to be seen how Rajamouli could make people sit this long. It’s not so easy to make people hook to the seats throughout the film. Since the film’s first part was a phenomenal success, the expectation on the second part are way too high.

The second part has done an exceptional pre-release business of a staggering Rs 500 Crore, shattering all the existing records of an Indian film. The film is simultaneously releasing in Telugu, Tamil and Hindi on April 28. Karan Johar is distributing the film in Hindi on Dharma Productions. Of all the scenes, Kattappa killing Baahubali is said to be the highlight of the film that is expected to bring tears to people. The last words of Amarendra Baahubali to Kattappa to take care of his mother Sivagami (Ramya Krishna) are said to be heartrending.

Besides this, of course, the face-off between Prabhas (Shivudu, Amarendra Baahubali) and Rana (Bhallaladeva) is going to be another highlight of the film. It’s said that the love story between Anushka (Devasena) and Prabhas (Amarendra Baahubali) leaves viewers with a romantic experience. Of course, the war scenes are going to be another highlight.