After delivering decent hit family entertainer ‘Sathamanam Bhavathi’, young and energetic actor Sharwanand joined hands with Noted director Maruthi of ‘Bhale Bhale Magadivoy ‘ fame. This combinational film ‘Mahanubhavudu’ is scheduled to hit the theaters on 29th September on the occasion of Dussehra. The makers are released Mahanubhavudu first look poster and a small teaser of Mahanubhavudu today i.e 24th August. This news is confirmed by Maruthi himself yesterday  and he took to twitter and wrote, “Hi friends Tomorrow (24th) 9.30am We r Releasing First look posters & small teaser of our film #mahanubhavudu ,very much excited :)” 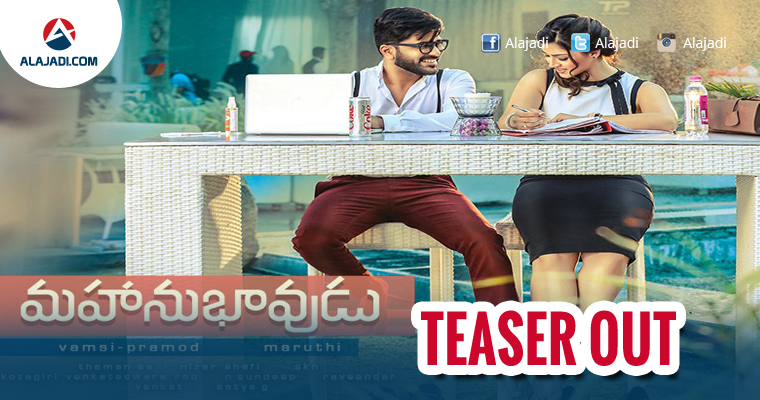 The first teaser for Sharwanand-Maruti’s ‘Mahanubhavudu’ is released. As revealed earlier, Sharwanand’s character in the film suffers from OCD (obsessive compulsive disorder) and it’s totally fun to watch him in that character. Maruti’s Bhale Bhale Magadivoy also had Nani as a memory loss patient. He seems to have followed the same formula again to score success at box-office. The teaser gave a glimpse of main theme of the film wherein Sharwa is highly-obsessed with all activities, including romance with the actress.

The 46-second teaser also concentrated on the glamour of gorgeous Mehrene Kaur who impressed us in Krishna Gadi Veera Prema Gaadha. A kissing scene where Mahanubhavudu asks the heroine whether she is brushed towards the end of teaser elaborates more about his disorder. Definitely, the teaser may also have reminded Nani in BBM with alike disorder features. And it remains to be seen whether he will strike gold at box-office like BBM again.

The new look of ‘Express Raja’ with grown beard and specs is just fabulous and the movie has got some high production valued from UV Creations and music is composed by Thaman SS.