Raviteja’s Raja The Great Teaser Out Is Now

Mass Raja Aka Ravi Teja is back to entertain audience after a long gap. The teaser of his upcoming movie has been released by the movie makers. The old style of Ravi Teja continued and it also entertains the audience. The film was launched on 6 February 2017 and principal photography began in April 2017 in Hyderabad. Anil Ravipudi joined with Ravi Teja for the first time. 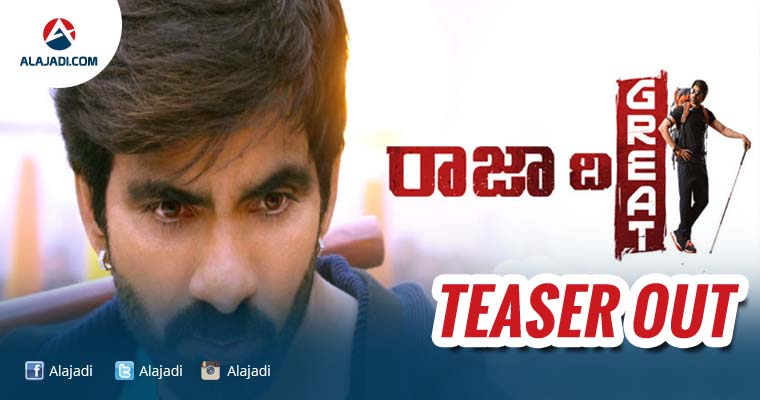 Raja The Great is directed by Anil Ravipudi. The story, screenplay were also done by Anil himself. The movies is being produced by Dil Raju under the banner of SVC (Sri Venkateswara Creations). Mehreen Pirzada is doing the female lead along side Ravi Teja in the lead role. The music is being composed by S.S.Thaman. The story of the film is quite different when you see the trailer.

Ravi Teja a gap of more than an year, he started working for a film which made everyone wait for the movie. It is under the banner of SVC for his new project which also brings anxiety to movie lovers to get entertained as we know Dil Raju. The maker chooses the story in a very unique way. Krishnagaadi Veera Prema Gaadha actress Mehreen Kaur Pirzada is being starred in this film to bring freshness. Mehreen Kaur has got some projects in hand which includes Jawaan : Intikokkadu starring Sai Dharam Tej in the lead role. She is also working with Sundeep Kishan in C/O Surya film. She has also a Tamil film in hand which are all filming. So, we are supposed to see her on silver screen for much days in year.The film stars Radhika, Prakash Raj and Sampath Raj in pivotal roles while Mehreen is Ravi’s leading lady in the film. The film is produced by Dil Raju and directed by Anil Ravipudi.

Ravi Teja got under the skin of Raja with total ease. Unfazed by his visual challenge, how Raja takes on the obstacles that come his way is what Raja The Great is all about. The teaser starts with Mass Raja Ravi Teja searching for a stick, which is not for a fight but for walking as he is blind in the film. Looking at the trailer we can say that the movie is going to be an action entertainer. Radhika is seen in the role of his mother.