Katamarayudu Pre-Release Gets Its Date And Venue

The most anticipated Power Star Pawan Kalyan and Shruti Hassan starrer Katamarayudu is all set to hit theaters on March 24th. As we all know that Katamarayudu doesn’t have any audio launch event same like Khaidi No 150, Dhruva, and Winner films. Mega Family following a new trend of the pre-release event instead of the audio launch event. Now, Katamarayudu pre-release function on March 18th. I know all the power star fans are eagerly waiting for this one. The unit initially thought of not having one such event as they were unable to fix a date and the venue, but now after looking at the audience’s excitement and their love for their hero Pawan Kalyan, the team has decided to put up this show. 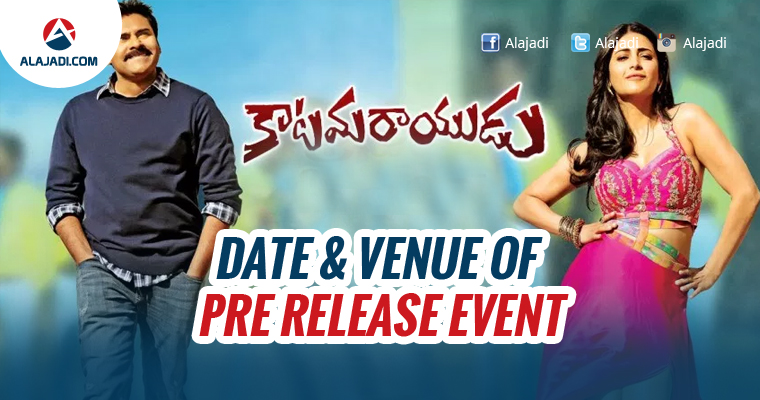 Mega fans are eagerly searching to know the venue of Katamarayudu pre- release event. According to the latest update, the pre-release event of Katamarayudu will take place at Shilpakala Vedika, Hyderabad on March 18th. Reportedly, Film team is currently busy in making arrangements for the grand event. Coming to the film, Katamarayudu has completed the censor scrutiny on March 15th and got U certificate from censor board. Film’s pridction house NorthStar Entertainment has took his official facebook page to share this info and wrote, “#Katamarayudu gets certified with a clean ‘U’ from the Censor Board and is to hit the theaters on 24th March”

Directed by Kishore Kumar Pardasani and produced by Sharrath Marar under the banner North Star Entertainment.The film features Pawan Kalyan and Shruti Haasan in lead role. Music is composed by Anup Rubens, Prasad Murella is handling the Cinematography and Gautham Raju is the editor of the film.