Kamal Haasan asks fans not to celebrate his birthday

Kamal Haasan is among the most accomplished actors in India, with more than 55 years of experience working in films of different languages and has nearly 200 film titles to his credit. Kamal Haasan has asked his fans/fan club association members not to celebrate his birthday, which falls on November 7. It is known that Tamil Nadu Chief Minister Jayalalithaa has been undergoing treatment in Apollo hospital in Chennai for over a month now.

Legendary actor Kamal Haasan, who shares good equation with her, looks to have decided not to celebrate anything until she recovers. On Sunday, Kamal requested his fans not to celebrate his upcoming birthday, Via a tweet made in Tamil, he asked fans to avert the celebrations this year in view of Jayalalithaa’s health condition. 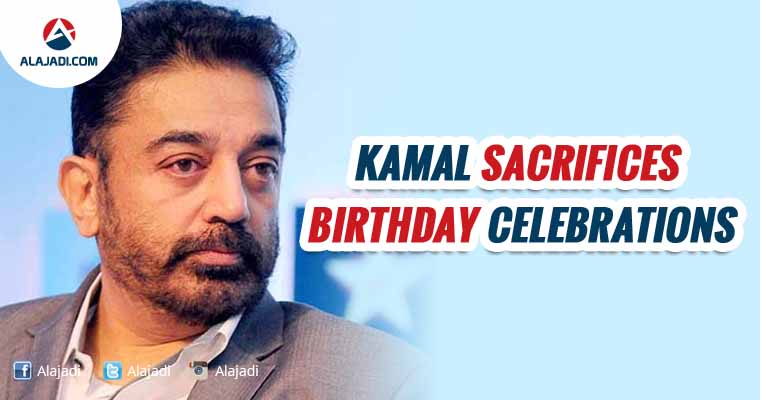 Sharing his feelings Kamal tweeted in Tamil which translates to “An appeal to my friends (of his fans club) in view of the health of Tamil Nadu Chief Minister.. My birthday functions should be avoided for sure.”

National political leaders, business men and high-profile guests from different walks of life have been expressing solidarity with Jayalalithaa by paying visits to the Chennai hospital, where she is undergoing treatment since September 22.

Every year, fans of Kamal Haasan celebrate his birthday as if it was a big festival. They also conduct several charity works on the eve. Despite his busy schedules, Kamal has never missed the events conducted by fans. Kamal’s sensible decision to avert the celebrations has been hailed by several film industry and political field biggies. On work front, Kamal is currently busy with “Sabhash Naidu”.