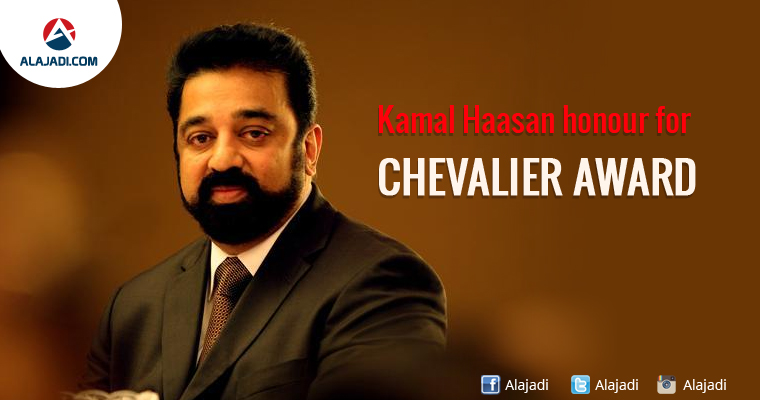 Kamal Haasan is the second Tamil starer after thespian Sivaji Ganesan to be honoured with the French award, with the latter  being chosen for it in 1995. The other Indians who have been conferred the Chevalier Order include Satyajit Ray and actors Sivaji Ganesan, Amitabh Bachchan, Aishwarya Rai, Nandita Das and Shah Rukh Khan.

He has won three national awards for the Best Actor and President’s Gold Medal for the Best Child Artist for the film Kalathur Kannamma (1960) and was awarded the Padma Bhushan by the Indian government in 2014, in his spectacular career spanning over half-a-century.

Kamal Haasan is currently recovering from a fractured leg,  who recently underwent a surgery for a fractured leg is now on the path of recovery. Kamal is going to dedicate this award to my admirers and audience who give me the tenacity of purpose to pursue to this day in moment my arts and letters.

He said he realized he is not alone in his chosen field. “Teachers and admirers are bounded around me. With motherly care, they have applauded my every little step forward. The melancholy of my parents not being alive to see this day is allayed by the fact the elders and the young in my family are around to enjoy it,” he said.